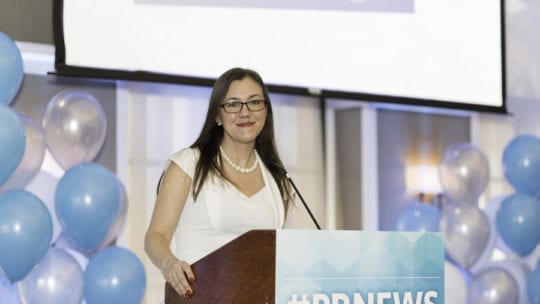 [Editor's Note: It's difficult to believe, but PRNEWS lost its editorial director, Melissa Hoffmann, last year at this time. Below, we re-print an appreciation published last October. May her memory be a blessing.]

The world of PR is a less magical place with the news that Melissa Hoffmann, PRNEWS’ content director, passed suddenly October 5. Known for her infectious passion and direct style, she led content for the PRNEWS brand since early August 2018.

A recurring theme when PR pros and friends remembered Melissa was her unbridled enthusiasm.

“It was not unusual for me to get emails from Melissa over a weekend asking for my feedback on an idea,” said Kerry Smith, Access Intelligence, LLC division president. “Her enthusiasm also was evident when she got on stage during our events,” he added.

Melissa Rose Hoffman was born in 1981 in Kingston, NY, to Elizabeth and John Hoffmann. A graduate of Kingston High School, she matriculated at SUNY New Paltz, earning a B.A. in journalism. Prior to PRNEWS, she was deputy managing editor at New York Law Journal and global managing editor at ALM Media. Her experience also included a post in strategy and business development communications at Weil, Botshal and Manges, LLP. These positions underscore her passion for service journalism, which is rare in our industry.

Most recently, Melissa oversaw and hosted PRNEWS’ 2019 Platinum PR Awards, the brand’s most prestigious honors. Held last month in NY, the gala encapsulated her eclectic mix of style and substance. Also on display was a penchant for injecting fun into otherwise serious occasions. Indeed, one of her goals for PRNEWS was to instill levity into some aspects of brand.

Accordingly, though the Platinums were stylish, complete with champagne and a glittering ballroom, the evening also included light touches. For example, Melissa suggested PRNEWS salute its 75th anniversary with champagne. But there also were delicious white-chocolate cake pops. She even hired a magician to mingle with the crowd during the cocktail hour.

In addition to her interest in doing good, Melissa was a devotee of hiking and camping. This led her to encourage PRNEWS editors to augment the brand’s coverage of environmental issues as they intersected with PR and marketing.  In addition, she also influenced staff to embark on a long-form journalism effort.

"It was a tremendous gift to come to work each day knowing Melissa was steering the ship," said Justin Joffe, senior content manager, PRNEWS. "She was my mentor, guiding my managerial development, and helping me build out our long-form enterprise reporting program. I'll treasure her wisdom about life in and out of the office."

Shelley Spector, co-founder of the Museum of PR, remembered Melissa "as an extremely smart, intellectually curious, empathetic, and kind person,”  Spector also noted Melissa's interest in PR history. During visits to the Museum, Melissa “showed an impressive understanding not only of history, but the role that PR played in shaping it,” Spector said.

“In fact, I had invited Melissa to speak about Denny Griswold, founder of PRNEWS, at our next Women's PR History event. She was really looking forward to that.” Melissa and Spector also planned to create an exhibit to honor Griswold and her contributions to PR.

Melissa’s enthusiasm struck Spector. “She was really enjoying her role as event planner and speaker” at PRNEWS.

An Inner Glow and a Direct Editor

Mark Weiner, chief insights officer at Cision, spoke of an inner glow. "Regardless of the topic – PR, PR research and evaluation, the PRNEWS editorial advisory board or the annual PRNEWS Measurement Conference – Melissa Hoffman’s light always shined brightly through her enthusiasm, her professionalism and her genuine interest in the matter at hand."

Melissa had a direct style as an editor. “She kept me on my toes,” said Allison Schiff, senior editor at AdExchanger, who first worked with Hoffmann more than 10 years ago. “Melissa could tell when I was writing around something either because I didn't understand it or because I was being lazy. She wasn't afraid to point out that sort of thing, and I'm grateful. Melissa made me sharper.”

The two became fast friends outside the office. Schiff saw another side of Melissa’s enjoyment of life. Her holiday parties, Schiff said, “were the definition of merry. We wore paper Christmas crowns while a massive decked-out tree twinkled with ornaments and “Die Hard” played in the background…she was one of the most truly genuine people I knew. If you asked her a question, you got the truth, and sometimes even if you didn't ask.”

Added Schiff, “Having to talk about Melissa in the past tense is a very strange thing. I'll miss her.” We will too, as will the PR industry.

Note: Donations in Melissa’s memory can be made at: Nolan's College 529 Fund, c/o his dad, Paul. For the address, please contact:  smaerowitz@accessintel.com or sarenstein@accessintel.com