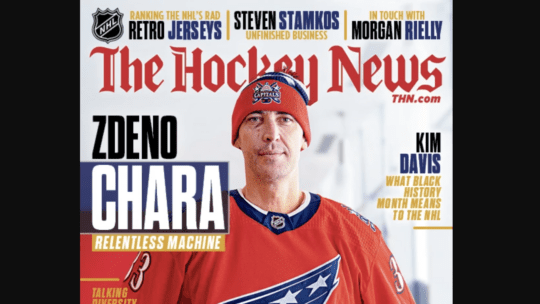 It seems like every day there's another brand—this time a publication—getting called out for short-sighting diversity. Today "The Hockey News" (THN), featured on SI.com thanks to an editorial partnership, tweeted about what could have been its 2021 diversity edition. Stories include “What Black History Month Means to the NHL,” as well as an interview with NBC Sports hockey analyst Anson Carter.

Users, however, did not respond kindly to the cover subject, defenseman Zdeno Chara, who (regardless of his Eastern European roots) didn’t exactly fit the profile for diversity. Needless to say, outraged followers and fan tweets flowed. Some wondered how it even got published.

This cover made it through however many editors before showing up on social media. Only then did anyone at The Hockey News see what the problem was.

The Hockey News really said, "For our DIVERSITY issue, we're going to have a big white guy on the cover."

I think Chara's great, so it's nothing against him, but how did THN look at the issue, look at the cover, and say, "Yup, this is what diversity looks like." https://t.co/K9k1SiRtos

The tweet was deleted and replaced with a statement claiming “internal miscommunication.”

The statement came off as a half-hearted explanation to many, who want the organization to do more.

What are you going to do (structurally and socially) to prevent this from happening again?

A Need for Diverse Voices

If anything, today's reaction showcased what THN needs to understand about audiences, beyond even its own readership. A statement is no longer sufficient. Many consumers are looking for more from brands, even those in a specific niche, which takes consideration and insight from a diverse set of viewpoints.

“This is another example of an organization's misstep on diversity and inclusion that leads to marketing mishaps and public apologies,” said Michelle Ngome, president of the African-American Marketing Association.

“D&I is not something that you can do in a flash. It is a continuous practice that everyone in the business has to be involved in," Ngone added. While she thought it was "great" that THN wants to publish a diversity issue, she asked, "Were there any Blacks or people of color to help contribute to the issue and make this ongoing effort?" She also said since Anson Carter is mentioned on the cover, "he should have received the cover image," instead of Zdeno Chara. "Furthermore, diversity goes beyond race, but THN missed the mark on it.”

Obviously, THN made the right decision in responding to followers—however, was it effective? Was the removal of the initial tweet necessary or should it have been preserved to provide greater transparency?

“Not only was the post tone deaf—especially during this period of civil unrest—the apology doesn’t address the issue at hand or offer a solution,” said Wendy Roundtree, founder, Jarel Communications.

“Fans are capable of forgiveness," Roundtree said. "But brands can’t sugarcoat or shy away from their mistakes. It’s okay to say, 'We were wrong.'”

And THN may welcome this painful, yet important, look into its audience, hockey fans and twitter users alike. The audience is asking for more. The incident provides an opportunity it to take a deep dive into the product it is delivering. However, as Roundtree says, it will have to decide on a path to expand on diversity and inclusion.

“It really depends on the end goal of the organization,” Roundtree said. “DEI shouldn’t be reserved for Black History Month or other cultural observances. If it’s truly a goal of the organization, they have to take actionable steps that are ongoing. An example in this case— featuring diverse individuals on their cover for an issue clearly focused on DEI.”

As many hockey fans know, the NHL falls far below typical sports averages for diversity in players, coaching, staffing and leadership. Typically a sport with regional fanbases, hockey strives to provide inroads to everyone, but can struggle due to the economic burden it can place on players and families. This lack of access can result in participants with similar backgrounds.

For example, fewer than 5 percent of NHL players are POC, according to Josh Sternberg's research for his article on the subject. As the NHL strives to open the game to diverse audiences, its effort conveys larger issues for the league and sport.

“If I was the cover editor of The Hockey News, I would have chosen a cover showing a number of players, white and Black, on an issue devoted to diversity,” said Arthur Solomon, a veteran communicator.

The NHL made several promises in Sept. 2020 about its commitment to diversity. While DEI initiatives don’t happen overnight, it will be interesting to see the trickle down to other areas in the hockey world, such as marketing and press coverage.