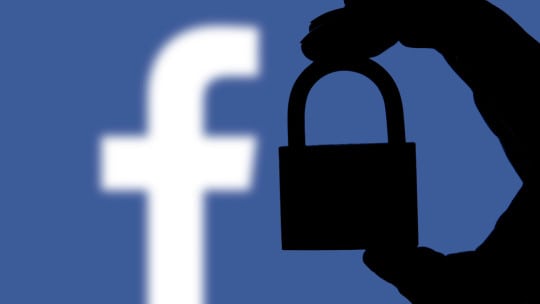 You can nip at the heels of category leaders such as Facebook but unseating them is a different matter.

Perspective is important, though. As Ryan George,VP, marketing and communications, First Global,a financial research and consulting firm,said during PR News’ Social Media Summit in Huntington Beach, Calif., late in February, Facebook is so large it can shed some of its 2 billion users for years without it being a significant issue.

The question at the moment, of course, is whether or not Facebook’s issues as a whole are enough to scare off users, brands/advertisers or investors in a significant way. At first blush the answer seems to be no or it’s too early to say.

To review the issues, they include the decline in youthful growth on Facebook, the scandals surrounding Facebook and Russian agents deploying fake news on the platform and Cambridge Analytica’s alleged breach of 50 million Facebook users’ data, which was later provided to consultants working for the Trump presidential election campaign in 2016. 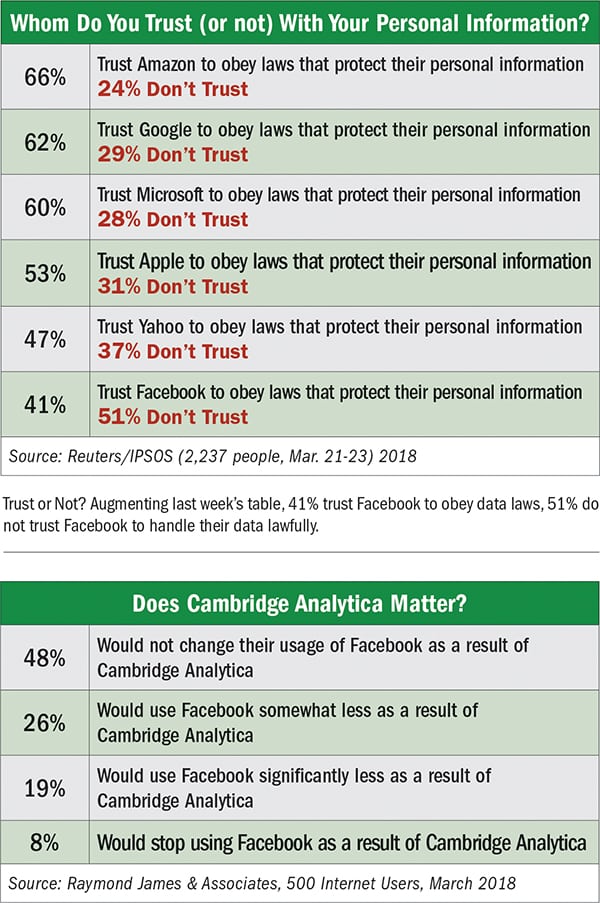 In FB We Trust?

Last week, we reported on a Reuters/IPSOS survey of some 2,000 people showing just 41% trusted Facebook to handle their personal data in accordance with laws (PRN, March 27).

This week we augment that survey, looking at the question in a slightly different way: How many people do not trust Facebook and other companies that collect it to deal lawfully with their data (see chart).

Adding even more data to the picture, investment firm Raymond James surveyed 500 Internet users in late March about Facebook and the Cambridge issue. Specifically, Raymond James was interested in whether trust levels that the Cambridge scandal would influence could result in users forgoing their daily or weekly Facebook fix.

As you can see in the pie chart just above, 84% of those surveyed told Raymond James they are “very concerned” or “somewhat concerned” with Facebook’s use of their data. This tracks with the Reuters/IPSOS survey in the left column top.

Clearly, users are worried about Facebook’s use of their data. Incidentally, Raymond James also found 43% of people were “very concerned” and 31% were “somewhat concerned” that Cambridge “abused data on Facebook to influence the 2016 presidential election.”

Despite all this concern and dare we say mistrust, almost half those Raymond James questioned (48%) said the Cambridge situation would not influence their Facebook use. See table called Does Cambridge Analytica Matter?

From a Distance of Six Months

Perhaps a more telling set of figures relates to the longer view. Raymond James asked the usage question in a slightly different way. In six months, it asked, when presumably Facebook will have unveiled even more procedures to make sure another Cambridge situation will not occur, will your usage of the platform change?

The answer to that question can be seen in the pie chart called Do You Expect to Change Your Usage of Facebook in the Next 6 Months?

Raymond James’ conclusion: “We note that while a relatively high percentage indicated they expect to use Facebook less [as a result of Cambridge], we believe these user concerns could ease as the news cycle slows on this topic.”

From a financial viewpoint, Raymond James urged its customers to hold their Facebook shares and even encouraged them to buy more.

Early in the news cycle of the Cambridge Analytica story, Facebook made headlines for its share price falling and the company losing billions in valuation. By late last week, most of Wall Street was in line with Raymond James’ relatively positive view of Facebook and its future. While Facebook shares fell badly in mid-March, they began to edge up toward the end of last week.

Looking at Facebook use means an examination of why people use Facebook. More data on that issue can be gleaned from the table called What Do Use Facebook For?As you can see, the large majority of the public uses Facebook for connecting with (67%) and reading about (86%) friends and family. A significant group (45%) uses Facebook to remember important events, such as birthdays, and post pictures (41%).

Facebook chief Mark Zuckerberg’s push to make the platform more video-based is starting to bear fruit. About 33% use Facebook to view recorded videos, while 10% are visiting the platform to watch Facebook Live video streams.

Raymond James also asked about recent Facebook changes to its News Feed and how they might be influencing users’ habits. In January, Facebook altered its algorithm to show fewer public news stories and other public content.

It doesn’t seem to have mattered to users. Around 76% of respondents said they spend the same amount of time on Facebook since the January 2018 change; 14% said they spend “somewhat less time” on the platform, while 5% spend “more time” and 4% spend “significantly less time” since the change. The pie chart above shows the Facebook user to be consistent; even without public news, he/she doesn’t seem to be seeking news elsewhere.

So, what does it all mean? Clearly we have a brand whose customers are concerned with how it’s using their data. On the other hand, the Raymond James poll shows those same users will continue to use Facebook, more or less as usual. And Wall Street seems fine with Facebook’s future.

Not everyone is as upbeat. Stephen Hahn-Griffiths, executive partner, chief research officer at the Reputation Institute, notes the multi-dimensional aspect of reputation and adds, “Ultimately, reputation links to behavioral support.”

While a decline in trust, which is one of the key sentiments that align with reputation, might have a strong impact on reputation, it’s also likely to have a significant influence on behaviors, such as the intent to purchase, willingness to invest and desire to say something positive.

A trust erosion, he says, is a leading indicator of “reputational decline and signifies a weakening of behavioral support. All this should give Facebook reason for grave concern based on recent events.”