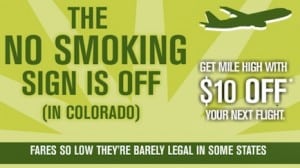 Low-cost carrier Spirit Airlines is taking advantage of the new law in Colorado allowing recreational use of marijuana. The airline launched a playful promotion on its website and via email, aimed at those who might be considering a trip to the state to light up in celebration of the new legislation.

It's a stark example of so-called "newsjacking," or a company aligning a marketing message with an item in the news. Spirit is offering customers a chance to “get mile high” with $10 off flights to Colorado. “The no smoking sign is off (in Colorado),” a promo on its website reads. “Book today...and be sure to pack some munchies,” the airline urges. Cute.

Spirit is not the first company to piggyback on the new pot rules in the Centennial State. Companies specializing in what has been dubbed “weed tourism,” or, more cleverly, "cannavacations," have been popping up all over the state since marijuana was legalized for recreational use.

The airline’s witty use of the news in marketing has won it plenty of acclaim from amused Twitter users. Still, some will point out that its flippant, marijuana-tinged marketing is inappropriate, especially considering that taking the plant on a flight is still very much illegal.

What do you think of Spirit’s marketing technique?