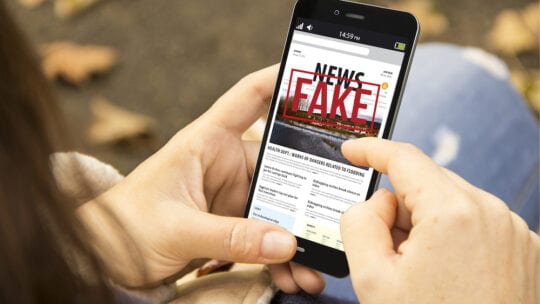 Fake news is not a fake problem. It can reshape public opinion, influence elections, and even lead to societal instability. While it has been around at least as long as newspapers, its negative effects in free societies were relatively mild until the advent of social media, which now plays a key role in its spread.

It is possible to spot fake news early because of patterns in the way it spreads, according to researchers. Just as cancer cells spread in specific ways, fake news propagates differently on social networks than real news. The longer fake news propagates, the more damage it can do.

If we can understand how fake news goes viral we can better determine why it goes viral, and how it can be spotted early. “Finding systematic and reliable approaches to identifying markers of fake news should prove invaluable in enhancing media literacy among PR professionals and the broader media-consuming public,” says Romeo Quintana, Jr., principal consultant, Arkintan Consulting.

The authors of “Fake News Propagates Differently from Real News Even at Early Stages of Spreading” sought to do this.

The authors developed a database of 1,701 fake news examples and 492 real news examples on a range of topics. Examples came from the China-based social media site Weibo during 2011-2016. Real news came from governments accounts, newspapers and other legitimate organizations, as well as non-official accounts with reputations for legitimate news. The database also included Twitter data from Japan, when a high volume of fake news relating to the Great East Japan earthquake circulated.

Graph analytics is a form of machine learning that focuses on discovering relationships within complex systems, such as social networks. The researchers used a directed network model to identify layers, or degrees, of separation between the creator of news and its re-poster. For instance, someone who shared an article a previous user shared, who, in turn, shared the article based on the original post, is considered a third layer.

The study found significant differences in the propagation of fake news appear within hours of initial posting, which may aid early detection.

While any news story should be deemed fake or real based on the merits of its content, author and publication, some of the study's findings could alert PR pros to the possibility that a story is illegitimate. For example:

The number of layers in fake news typically is larger than that of real news–i.e. the chain of people sharing fake news is longer. If you come across news on a social channel that has been passed on to you via a series of people, as opposed to maybe just one trusted person who found the article, you may want to scrutinize it for authenticity. This is not easy to do on Twitter, so you’ll probably want to use a social analytics tool like Meltwater to do the heavy lifting.

Similarly, the study found that people down the line who share the article play a much larger role in propagating the news than the original poster. If an article has gone viral, but the masses of people sharing an article are several steps removed from the original poster, it may also be a sign that you need to dig a bit before presenting the content to an executive, or basing a decision on it.

Seasoned PR pros tend to have good intuition when it comes to spotting fake news. But, not everyone is seasoned, and highly deceptive stories can slip past even the sharpest veterans. Once again, any article should be judged on its merits before it is dismissed as fake, but if it reaches your Twitter feed by way of 4 other posters, you might want to take a second look.