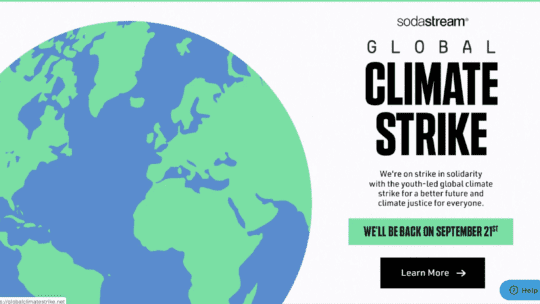 Companies around the world took a stand on Sept. 20 to encourage action on the climate crisis by supporting the Global Climate Strike.

In August 2018, 15-year-old Greta Thunberg sat in front of Sweden's parliament every day for three weeks to draw attention to its lack of action on climate issues. Young people around the globe noticed her vigil via viral social media posts. #FridaysforFuture was born.

#FridaysforFuture led to the Global Climate Strike. Today's strike includes more than 7,000 brands. In addition, its existence might reveal a prolonged escalation for movement on corporate social good. Similarly, corporate social good could become a constant theme for the next generation. We took a look at the ways brands are participating in the Global Climate Strike.

Google aside, the days of employees holding their tongues regarding social issues and activism may be a thing of the past. Thousands of businesses allowed workers to participate in the Global Climate Strike.

Companies like Patagonia and Ben & Jerry’s closed locations to allow staff and potential shoppers time to exercise their right to protest. Etsy and Seventh Generation closed offices to march along with student activists.

Today the next generation is writing history, and we chose to be on their side of it. The Seventh Generation office is closed as our team across the globe stands up to #ClimateStrike alongside the youth climate activists leading the charge. #StrikeWithUs pic.twitter.com/BJlkH1qNbX

Allowing staff time to participate facilitates employee goodwill and creates internal brand ambassadors. Happy staff is more than likely to promote positive company policy across social media and within their personal networks. This, of course, extends the corporate social-good narrative.

More than 1,000 corporations signed up to flip their normal retail and service websites and instead featured a message supporting the Climate Strike. Retail players like Lush Cosmetics and Burton boards darkened their websites for the day. These sites encouraged customers to return tomorrow for purchases, and learn about climate change in the meantime.

“As a business with deep roots in environmental activism, giving our thousands of staff the time to get out there and demand bold action is a no brainer. We all share this planet, so we need to band together to sound the alarm and show our politicians that ‘business as usual’ is no longer an option. The climate crisis won’t wait, and neither will we.”

The 24-hour website flip can show consumers that profits are not the only mission of these companies, which in turn actually can help sales. When Patagonia announced in 2016 that it would donate 100 percent of Black Friday profits to grassroots environmental organizations, the company shattered records with $10 million in sales. Patagonia’s mission was not just embraced, but historically celebrated amongst consumers.

With crime, politics and sports owning much of the real estate in the news cycle, science and environmental reporting can take a backseat. Extensive climate reporting siphons resources away from newsrooms already stretched thin. It doesn’t make it any less important, however.

The Columbia Journalism Review and The Nation recognized the increasing importance of environmental coverage. This resulted in Covering Climate Now (Sept. 15- 23). More than 300 news organizations from around the globe—print, digital, broadcast—signed on to contribute and share exclusive climate-related news. Journalists from Pacnews in Fiji to The Nome Nugget in Alaska reported on issues.

Sometimes people cannot see things happening right under their nose. When you repeat a message, flooding the airwaves and web, it may be more likely to resonate. Climate change touches global citizens in many ways, and it’s not going away any time soon. The more brands do to educate and empower consumers, the more important messaging for that purpose will become.