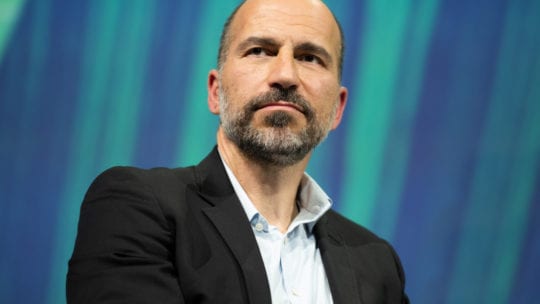 On the Sun., Nov. 10 episode of "Axios on HBO," Uber CEO Dara Khosrowshahi gave a false equivalency heard round the world.

Axios asked Khosrowshahi about Uber's take on the murder and dismemberment of Washington Post journalist Jamal Khashoggi by The Kingdom of Saudi Arabia. The Kingdom of Saudi Arabia serves as Uber's fifth-largest investor whose sovereign wealth fund head has a seat on Uber's board. Khosrowshahi's response seemed flip and dismissive over the act, calling it nothing more than a "mistake." And then he made things way worse.

“It’s a serious mistake,” Khosrowshahi said about the kingdom's murder of Khashoggi. “We’ve made mistakes too, right? With self-driving, and we stopped driving and we’re recovering from that mistake. I think that people make mistakes, it doesn’t mean that they can never be forgiven. I think they have taken it seriously.”

Khosrowshahi immediately apologized. “I don’t believe that the Khashoggi murder is something to be forgiven or forgotten, and I was plain wrong to compare it to anything that we have been through,” he said in a statement to staff on Tues., Nov. 12. “That was absolutely wrong.” He also apologized for putting the company, once again, in the position of being the evil, unfeeling, futurist boogeyman.

Last week, Uber reported $1 billion in losses, despite its third-quarter results beating estimates. This week, an angry social media mob reacted to Khosrowshahi's comments by keeping the #BoycottUber hashtag trending all of Monday, dragging out many of the company's skeletons in the process. Here's what Khashoggi's former editor had to say:

Everyone who uses Uber should consider the implications of @dkhos's words

If one of @Uber's main investors kills someone it doesn't really matter. A representative of a murderous regime can still keep a board seat.

When you're rich, your crimes become "mistakes". #BoycottUber

"Calls to boycott Uber have resonated since at least 2017," Spencer Bokat-Lindell wrote for The New York Times, "when the company was accused of capitalizing on a taxi strike protesting President Trump’s ban on travel from several predominantly Muslim countries. The following year, a former Uber engineer sued the company for sexual harassment, cementing the company’s image as a misogynistic playground for tech bros."

More seriously, Bokat-Lindell writes, "boycotting Uber may be a way to register an objection to what seems a growing tendency among multinational corporations to maximize their profits at the expense of liberal democratic values."

For PR pros, the latest round of calls to #BoycottUber also contains many lessons around what constitutes good, and bad, investor relations. Here's what we learned.

Everyone needs media training—especially the C-Suite

"Axios on HBO" has a reputation for airing candid access and interviews with subjects, which is all the more reason that Khosrowshahi's team could have better prepared him to answer questions around Uber's relationship to Saudi Arabia with tact and poise. A rogue CEO strays when they don't know how to stay on the path.

“We have an eight-hour media training program for our executives, but we don’t push the CEO on that," Bell CCO Bob Hastings told PRNEWS. "We get time on his schedule as we can."

But convincing an executive that they need coaching is another matter. "I remind them that even Tom Brady has a coach,’’ Hastings added. “Nobody is too good to practice.’’

Despite the fact that Khosrowshahi positioned his words as a misstep, the comments are enough cause to question whether or not his attempts to mitigate the Kingdom's behavior were deliberate—part of a company line to normalize, and humanize, the inhumane behavior of one of Uber's key investors.

Though the best practice with ethically-compromised investors remains to simply not take their money, it's idealistic to think that it won't continue to happen—especially in Silicon Valley.

Nonetheless, brands should do thorough research vetting investors before taking their money, and if something controversial comes up after an investment is made, it's the chief communicator's job to assume that, sooner or later, that controversy will come up in public.

Put every possible type of crisis on the (pivot) table

Part of a crisis plan should involve an "if this/then that" style pivot table, forecasting the litany of possible controversies and crises that could impact brand reputation, with flexible action plans for each. Uber's pivot table, no doubt, is very large. No matter how many potential crisis scenarios you've thought through, however, investor relations must be included on the list.

"There are a lot of different variations from what you think may happen," the former communications VP of the Motion Picture Association of America, Kaelan Hollon, told PRNEWS. "But getting people thinking through it, and talking through it with this table saves so much time at the end of the day, and in the heat of the moment. Communications can sometimes fall by the wayside when people are worried about congressional investigations, things like that. You know, little things."