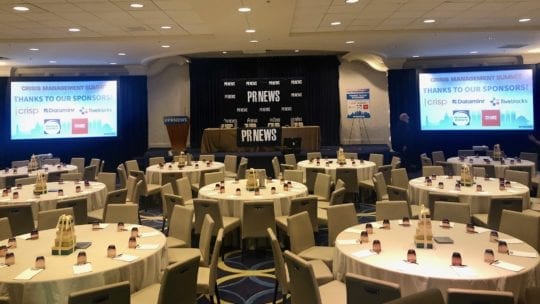 Preparing the CEO and other C-suite executives for press interviews isn’t the easiest of tasks. They’re busy, don’t always see the value and often have legal counsel telling them not to talk.

So how do you crack the code? Patience, videotape and building a strategic relationship are key, said panelists at the the PR News Media Training Workshop on Feb. 27, part of the inaugural Crisis Management Summit in Miami.

Grab The CEO Wherever

Bob Hastings, chief communications officer of Bell, gets time with the CEO whenever he can. He recalled having a useful training conversation with the CEO in a limo to the airport. “We have an eight-hour media training program for our executives, but we don’t push the CEO on that. We get time on his schedule as we can.’’

And Hastings makes sure to use his time during the weekly meeting of top company executives to show examples of other companies and their media strategies— what people are doing well and what they are doing poorly.

CEO as The Face

All of the panelists stressed the importance of having the CEO speak when the stakes are high. “The CEO is the person who can carry the values of the company,’’ said Hinda Mitchell, president of Inspire PR Group. “When times are tough, people want to hear from the CEO about the values of the organization. The CEO is lead ambassador of the brand.’’

And how do you get CEOs to listen? Tell them even the best can be better. “I remind them that even Tom Brady has a coach,’’ Hastings said. “Nobody is too good to practice.’’

The panelists said an effective way to train CEOs is to videotape them so they can see how they look on air. “We let them watch the video and let the executives critique themselves; they’re usually pretty honest,’’ said John Cihomsky, vice president of PR and Communications for Sharp HealthCare.

“Even if they will never do a TV interview, the benefits of seeing yourself can’t be overstated,’’ Mitchell said.

One frequent stress point is when the firm’s legal counsel is advising no comments at all and the PR team thinks there needs to be some public comment.

Ultimately, it’s the CEO's decision, but having an existing relationship with the lawyers to hash things out ahead of time is key, Hastings said. And the CEO can often be persuaded that it would be folly not to say anything—because there will be press either way.

“We remind them; we define this on our terms or someone else defines it for us,’’ Mitchell said.