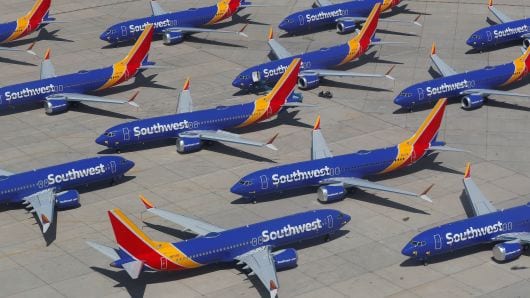 Here at PR News, we've covered the two major crashes of Boeing 737 Max planes in great detail. Editor Seth Arenstein was among the first to connect the dots between the two crashes, and even went on Marketplace earlier this month to offer a brief comment:

What was foretold in this NPR report has played out exactly as many guessed. Following the Lion Air crash in October came allegations that Boeing knew this iteration of the aircraft had issues. Boeing's response was muted. It discussed a software tweak and dispatched teams to brief airlines on the 737 Max 8, but there was no talk of grounding the fleet, for example.

Six months later, the Federal Aviation Administration (FAA) refused to ground the planes following the second crash (even after most other countries had). The fleet was grounded when President Trump did so through an emergency order. That helped to raise the story to front-page news here in the U.S. Eventually it led to public discussions about how much the FAA actually provides tangible oversight and regulation when it comes to aircraft certification. It's an old issue in aviation circles.

"For more than six decades, the Federal Aviation Administration has relied on employees of airplane manufacturers to do government-required safety inspections as planes are being designed or assembled," The Associated Press wrote recently. "But critics say the system, dubbed the 'designee program,' is too cozy as company employees do work for an agency charged with keeping the skies safe while being paid by an industry that the FAA is regulating."

Who regulates the regulators?

This process became a central focus of Senate hearings this week (Wednesday, March 27), when Elaine Chao, the secretary of transportation, was questioned extensively. Some immediate concessions that were made, including the Department of Transportation’s inspector general agreeing to perform an audit on the F.A.A.’s certification of the 737 Max. In addition, Boeing promised a software update that it says will address safety concerns.

Meanwhile, Southwest Airlines, which has more 737 Max planes than any carrier, reported the same day that it cancelled 9,400 flights recently—2,800  as a result of the 737 Max groundings—and would lose $150 million this quarter.

Calvin Scovel III, the Transportation Department’s inspector general, promised during the hearing that his audit "would investigate why the F.A.A. approved MCAS and how the agency concluded that information about it did not need to be part of the plane’s manual and pilots did not need additional training," reports the New York Times.

The most telling part of the hearing might have come when Chao was questioned around the longstanding practice of allowing airplane manufacturers to certify their own planes as being up to safety standards—she called the process "necessary" as the FAA lacks the resources to certify the thousands of planes.

"Boeing, through the Organization Designation Authorization program, was able to choose its own employees to help government regulators certify the 737 Max," wrote The Times. Daniel Elwell, the acting administrator of the FAA, further explained that that practice was “part of the fabric of what we’ve used to become as safe as we are today.” Without it, the FAA would need 10,000 more employees and $1.8 billion for its certification office.

Real regulation must come from a third party

Sure, air disasters take a long time to investigate, and much of what Boeing is saying now is speculation to mitigate the crisis until real answers are available. Of course there are plenty of example of large companies being slow to admit their faults.  This makes the need for true oversight all the more pressing.

But when true oversight occurs, oh how positive the results can be. Starbucks asking the NAACP Legal Defense Fund to prepare a report on ways that the company could combat racial bias after it wrongfully arrested two black men last summer is one example. The company knew that it needed expert thought leaders familiar with why it failed to do the right thing. And it knew that these experts needed to come to the situation a few degrees removed from the issue. As the saying goes, it's hard to see the forest through the trees.

What Starbucks did right is it made sure that in owning up to its failing and forging a path forward, it didn't deny or forget that the incident took place. Rather, the ubiquitous brand internalized the lessons and folded solutions into every fiber of its corporate DNA—from closing its stores for a day of anti-bias education to special training for new employees and a thorough revamp of its customer bathroom policy—ensuring that the changes would be permanent, not temporal or superficial.

Working with a true third party to fundamentally change oversight protocol will ensure any solutions for the 737 Max are not just ornery gestures on behalf of Boeing and the FAA. That's likely the only true fix for this slowly smoldering crisis, a fix that the aviation industry would be wise to invest in—no matter the cost.