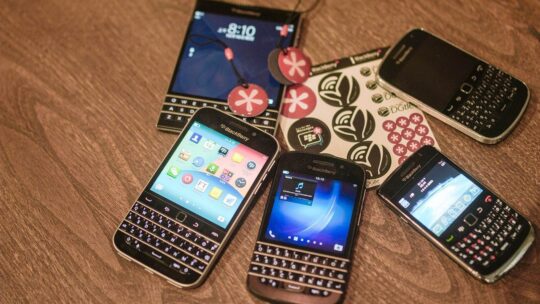 'Tis a sad day for BlackBerry fans. The company turned off service for the iconic smartphone today (Jan. 4), one of the original digital communication tools of the 21st century. BlackBerrys could be found in the hands of power brokers and public figures around the globe during the early 2000s, until Apple released the iPhone, in 2007. Within a couple of years, everything changed.

However, some super fans—including a  few famous ones—refused to put down their lifeline of choice. You may remember a certain POTUS, number 44, refusing to give up his BlackBerry, much to the displeasure of White House security.

BlackBerry now functions primarily as a cybersecurity and software company, pivoting out of the mobile phone market.

By this afternoon (Eastern Time) the company acknowledged the end of an era. It posted a thoughtful statement from executive chairman and CEO John Chen, who delivered a formal declaration of the company's complete transformation. Chen wrote about how he felt when receiving his first BlackBerry (“a rite of passage”), as well as giving a nod to fans.

“The fierce commitment of our customers to their BlackBerry devices still fills us with pride, though we stopped manufacturing them years ago. We have been holding off on decommissioning the BlackBerry service out of loyalty to our customers for a long time.”

Communication Tips for Sunsetting a Product

The social media accounts for BlackBerry showcase a voice that is very businesslike, professional and cutting edge. So while the idea of leaning into a fun nostalgia campaign is a consideration, it might not be the right fit.

However, Melissa Vela-Williamson, chief communication architect and founder of MVW Communications, says that one of the first things to do when sunsetting a product is to take the company’s relationship with its consumers into account.

“Like the end of any relationship, there needs to be communication about what is happening, why and how to move forward together now,” Vela Williamson says. “Is there a way to evolve that relationship into a new product line, service or organization?”

Sarah Evans, founder and CEO, Sevans Strategy & Sevans Digital PR, and an admitted BlackBerry user/fan, agrees. A space could be created for brand loyalists when a service ends, Evans says.

“Sunsetting a product is completely different in today's age of social media and the emergence of web3,” Evans says. “It's no longer a sunset, but a quick eclipse that has an opportunity to evolve into something that has long-lasting implications in so many places.”

Evans suggests seizing the opportunity of re-emerging in the metaverse through NFT “nostalgia drops,” or a Discord channel for people to share memories and experiences. Simple elements can keep a product alive for years, even following change.

“The sound of spinning the trackball (the original corporate fidget toy) is even an opportunity to capitalize on if savvy brand owners are thinking about what's next,” she says.

It seems as though McDonald's' McRib reemerges every few years. And if you are a child of the 1980s, you may notice certain toys and cartoons like Transformers, Smurfs and Teenage Mutant Ninja Turtles making a modern comeback. In 2020, vinyl records outsold CDs for the first time in years. There’s something to be said for nostalgia and a great product never really disappearing.

“A second life for products can happen by consumers reworking them and brands staying open to courting their past customers,” Vela-Williamson says. “Smart companies find progressive ways to keep the fundamentals of what makes a product special and refresh it for a new audience.”

Blockbuster is a shining example of this. The 2020 documentary, “The Last Blockbuster,” showcased a story of the company’s demise, but also acknowledged super customers who look upon it with true love and nostalgia. Today, the last Blockbuster location, in Bend, Ore., serves as a popular tourist destination for fans from around the world.

Vela-Williamson says companies should leave a light on for consumers.

“They should warmly lament the end of their product with their consumers, and keep a line of engagement or future possibility open,” she says. “When Blockbuster LLC announced it was closing forever in 2013, there was an official statement with earnest acceptance of marketplace reality in the CEO’s remarks. However, the CEO pledged to leverage the brand.”

If vinyl and VHS can make a comeback, who knows if that magic keyboard is really gone forever? You just may see a hacked BlackBerry hanging out the back pocket of your kids’ jeans someday. True nostalgia is always cool.