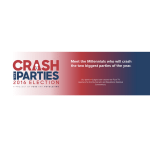 Crash the Parties, a national campaign developed by Fuse Media and Voto Latino, was designed to bring new excitement and diverse voices to the 2016 election. In 2016 more than 27.3 million Latinos were eligible to vote with close to 12 million of those being Latino millennials. With that in mind, Fuse Media and Voto Latino set out to find two aspiring reporters to cover the 2016 Republican and Democratic National conventions.

The first phase of the competition called for contestants to submit a one-minute video telling why they should be selected to report from the conventions along with three interview questions they would ask elected officials. Out of nearly 200 applicants, only two would be selected to attend a respective convention.

The second phase consisted of public voting. Videos were made public for viewing and allowed voters to select their favorite RNC and DNC contestant. The voting period began May 16 and ended May 31. It prompted contestants to share with their networks and encouraged voting for their video. After more than 12,600 votes the top videos were sent to the next phase.