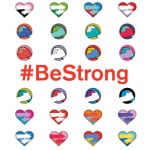 While cyberbullying is a growing concern in the digital world, young people lack the tools to help them take a stand and show support for friends being bullied online. Vodafone set out to address the cyberbullying epidemic with a campaign anchored on the creation of a new set of anti-bullying emojis to empower young people to support each other across multiple social media platforms and markets.

The entire campaign was a collaborative process with teenagers. A panel of 5,000 teens surveyed by YouGov chose the final emojis that were used on Snapchat, Imoji and the #BeStrong emoji keyboard. These assets persuaded Tyler Oakley and other major influencers to join the #BeStrong conversation.

The global research revealed that most teenagers struggled to find the right words to show support for friends being bullied online. Vodafone used the YouGov study to involve the teenagers in the design and selection process for a series of "support" emojis, to ensure the emojis would appeal to their target market.

In back-to-school month (September) the research, emoji designs and an emoji equation video were released. A Snapchat partnership and the #BeStrong Snapchat filter was released overAnti-Bullying Week (November 2015). Safer Internet Day 2016 (February 2016) was leveraged to launch an emoji keyboard on Snaps and Imoji, as well as collaboration with leading digital influencers who released their videos from February to March to a combined following of over 20 million people.