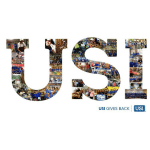 USI has created a unique and thoughtful corporate social responsibility program that makes a positive difference in the neighborhoods where its employees live and work. USI Gives Back is an annual, nationwide campaign where everyone comes together as one to invest their time, talent and treasure in local community service throughout the year.

USI Gives Back is about saying "thank you" to the communities that have been so instrumental in helping USI grow. Since its launch, more than 4,400 employees have come together to volunteer during USI Gives Back to assist hundreds of organizations and facilities, helping over 100,000 people annually.

To honor USI’s 20th Anniversary, the company launched “20 for 20,” where employees across 140 offices engaged in local community service during 20 weekdays in August 2014. USI received so much positive feedback that it decided in 2015 to turn the anniversary campaign into an annual event—creating USI Gives Back.

The target audience of USI Gives Back includes USI associates, industry partners, customers, prospects and potential acquisition partners and employee candidates. Most importantly, this corporate responsibility program was designed to help those in need. For example, employees at the USI corporate headquarters in Valhalla, New York, celebrated USI Gives Back by packaging 4,000 pounds of rice into 2,000 zip locked bags at the Food Bank for Westchester in Elmsford, New York.

Simply put, USI Gives Back has been a success, and since its inception, employee satisfaction has increased, clients have praised USI’s local commitment and the media has featured several events.