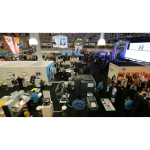 drupa, the world’s leading trade show for the graphics and industrial print industry, takes place once every four years in Düsseldorf, Germany. Hailed as the “Olympics of Print,” every major commercial printing development in the last two decades has been announced leading up to or at drupa.

HP and Porter Novelli (PN) combined forces to create a B2B content marketing strategy positioning HP at the forefront of the online drupa conversation leading up to and during the 11-day event, tasked with using video to demonstrate how HP is reinventing graphics printing for applications such as packaging, marketing documents and interior décor across all geographies.

Content was published across HP Graphics Arts YouTube, Facebook, Twitter and LinkedIn accounts, HP blogs, executive LinkedIn blog posts, SlideShare and the HP.com drupa microsite, along with HP brand accounts. The team leveraged an executive video studio at the show for longer-form videos and used the videos produced before and during the show to promote across platforms, while also deploying popular content formats, including GIFs, live streams and short Twitter videos.

The team also deployed a YouTube channel refresh to better optimize content on the HP Graphic Arts channel. With over 1 million views a year, the team saw the opportunity to refresh the channel, from the channel art and metadata to the internal management processes and public-facing organizational structure. Included in this refresh was updating the content hierarchy and user experience, along with creating a drupa-specific playlist to point subscribers and visitors to the latest news and HP vision around the show.