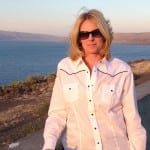 As her clients can attest and as her colleagues at FWV know, Natalie Best represents the epitome of today’s PR professional in every aspect. Her professionalism, positive attitude, work ethic and general demeanor represent all that is great about the service and communications industries.