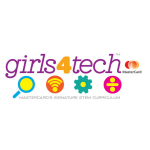 Girls4Tech is MasterCard’s signature education program designed for young girls around the world. Through the Girls4Tech program, students apply their own special skills, as well as math and science concepts they’re learning in school to solve real-life challenges.

Members of the core G4T team travel to various locations to organize programs around the globe. Once each location has been trained and have implemented their first event, they can continue to host Girls4Tech events in their local communities. In all, more than 50 G4T events have been organized in 11 countries.

Through the program, girls are able to explore, create and innovate technologies that are SAFE, SIMPLE and SMART–the foundation of MasterCard’s mission. In SAFE, students play the role of “Fraud Detectives” and realize that its takes intuition, as much as data analytics, to detect fraud. They explore the world of encryption and learn about the history of this security solution.

In SIMPLE, students model the concept of digital convergence and try out the latest in Near Field Communication (NFC) technology and biometrics. They model a transaction network and innovate the network to make it run more efficiently. In SMART, students devise and revise algorithms to solve problems as they race against the clock. They also collect, organize and analyze big data to solve a school problem on their own.

MasterCard has generated excitement with employees around the world by hosting Volunteer 101 sessions and via internal stories and blogs. They also developed a global volunteer week with several G4T events happening in England, Spain, Brazil, New York, Missouri and Delaware.

By Dec. 15, 2016, MasterCard had reached over 11,000 girls around the world, with over 1,000 MasterCard employees serving as role models and mentors, resulting in more than 5,000 hours of hands-on STEM volunteering to benefit underserved youth.