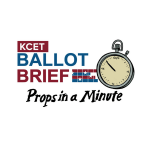 In a climate where news stories constantly pop up on the internet from unverified sources, KCETLink Media Group set out to create Ballot Brief, an online electoral destination at KCET.org/ballotbrief and LinkTV.org/ballotbrief to provide users with informative, intelligent political information and balanced analysis pertaining to California state and national elections. The online guide’s objective was to enhance understanding of the issues and candidates and to encourage political participation.

A key component of the initiative included a non-partisan effort to help voters understand 17 complex propositions on California’s ballot that ranged from legalizing marijuana to banning the use of plastic bags. The Ballot Brief news team conceptualized a Facebook video series of one-minute explanations for each of the ballot measures called “California Propositions in a Minute,” wherein Social Connected’s news anchor Val Zavala would run voters through the key points of each proposition in 60 seconds, utilizing fun graphics and easy-to-understand language.

In early August, the team started posting the one-minute videos on Facebook. By November 8, the videos had won 1.5 million impressions. At one California high school, a teacher of a U.S. government class made watching all 17 of the videos an extra credit assignment for her students. The team also shared the videos with the NPR affiliate KCRW, which posted them to their website. Additionally, the team partnered with Southern California public radio station KPCC to feature the “Props in a Minute” explainers as part of their election guide.

The videos gained 1.5 million impressions on Facebook, with the explanation of California Proposition 64, the marijuana legalization initiative, seeing the highest engagement at 41,161 views, 471 likes, 451 shares and 55 comments. The project ended up being the most successful digital video campaign for KCET in 2016.