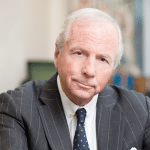 PR News recently asked its community to tell us who should be listed among the top game-changers of PR in the last few years. Here, we look at game-changer Jim Abernathy. Check out the complete list of the 50 Game-Changers of PR for 2017.

After an 18-year career in corporate communications with media outlets like CBS, Warner Communications and ABC, Jim Abernathy decided it was time to blaze his own trail.

He left his job as head of corporate affairs at ABC in 1984 and, along with co-founder Jim MacGregor, created Abernathy MacGregor. The agency has become one of the world's leading strategic and financial communications firms, with offices in New York, San Francisco, Los Angeles and Houston and a network of 51 partner offices around the globe. Abernathy is also the founder and co-chairman of AMO, the global partnership of corporate and financial communications consultancies.

Abernathy MacGregor boasts a roster of long-standing clients such as Booz Allen Hamilton, Mattel, RE/MAX and Starwood Capital Group, to name a few, and has also helped such iconic business leaders as Ralph Lauren, Barry Diller and Craig McCaw.

A hallmark of Abernathy's leadership is his ability to both anticipate his client’s needs and offer uniquely effective solutions. At Abernathy MacGregor, he added M&A communication capabilities, acquired a financial services-focused boutique agency and developed bankruptcy and restructuring practices, while expanding the agency's focus from crisis communications firm to comprehensive crisis manager.

His company has also served as a sort of leadership training ground. Abernathy MacGregor alumni now hold the highest-level corporate affairs positions at numerous Fortune 500 companies and private institutions, as well as leadership positions at a wide range of communications consulting firms across the country.

Another hallmark of Abernathy's leadership is his strong moral compass and humility—he typically won't allow his expertise to be acknowledged publicly. Abernathy also turns down clients who are not upfront and honest, deciding against certain lucrative business deals when they don’t reflect his morals.

Abernathy gave up his role as CEO in 2016 and now serves as executive chairman of the firm. He's also a former chairman of The Caron Foundation of New York City, current trustee emeritus of Hackley School and current chairman of The National Council on Alcoholism and Drug Dependence.

Most Interesting Fact Not Found on Jim's Resume

"That I’m a tremendously funny guy (but you’d have to ask other people to verify that)."

Jim's Advice to His 20-Year-Old Self

"First, get a law degree, not to practice law but for the useful skills you’ll learn and the mental discipline it provides. Second, always consider the various permutations of your actions before you act."

Jim's Profession in an Alternate Universe