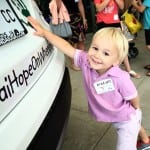 This past September, during National Pediatric Awareness Month, Hyundai’s efforts to fight pediatric cancer received 26,000 retweets and favorites, 14 million impressions and 110,000 video views. Through a series of paid and organic posts, the content published from the Hyundai Hope on Wheels social media channels took the organization to over 100,000 Facebook likes in September 2016—a key milestone.

A main goal of the Hyundai Hope On Wheels (HHOW) initiative is to fund innovative research. Every time a new Hyundai vehicle is sold in the United States, Hyundai customers join Hyundai and its dealers in the cause; in all, Hyundai has funded more than $115 million in pediatric cancer research in the United States.

While 80 percent of children with the most common types of pediatric cancer can survive, progress for many rare pediatric cancers has been limited. This challenge motivated HHOW to create the Hyundai Quantum Grant, launched in March 2016. The Quantum research grant is solely committed to transformational research on pediatric cancers with the lowest survival rates.

A key feature of Hyundai’s grant-giving campaign is the presentation of each research grant. Hyundai works with hospitals to host Handprint Ceremonies. At the ceremony, the handprints of children faced with cancer are captured in paint on a white Hyundai vehicle. There is nothing as personal as an individual handprint. Representing the dreams, future and hopes of each child, every handprint tells a story.

The vehicle serves as a canvas for hope, covered with handprints collected from children across the country battling cancer. These ceremonies have been taking place across the country, signifying that pediatric cancer is a problem across the country. Hyundai produced more than 30 videos for the Handprint Ceremonies and aired them on Facebook Live.