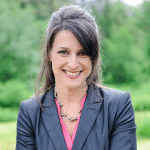 Brandi Frye led the creation and launch of Qorvo brand upon the merger of TriQuint and RFMD two years ago. Frye subsequently built a team of employees, consultants and agencies to deliver the strategy and execution for worldwide product promotions, public relations, corporate communication and employee engagement. Qorvo’s legacy companies were each about a billion dollars in revenue and it has grown to nearly $3 billion in less than two years—a testament to reaching new customers and building trust in a new combined vision.

"United as One" was an employee campaign to build one combined culture, post-merger. Frye served as the campaign lead strategist, and assembled the team to deliver it. Feedback from the CEO, executive staff, board of directors and a survey of Qorvo’s top 100 leaders shows that the corporate culture is healthy, employee engagement is high, turnover is low and hiring is up. Anecdotal feedback from employees and social media shows that employees have embraced the new brand and are committed to the success of the combined company.

Qorvo has focused on creating interesting content relevant to its target audience of RF engineers, and has also proactively given its opinion on industry trends affecting the general business and high tech world. In the past year, Qorvo has earned the #3 spot in share of voice in the four top business publications. Qorvo has also built a strong foundation with local press in its four largest locations.