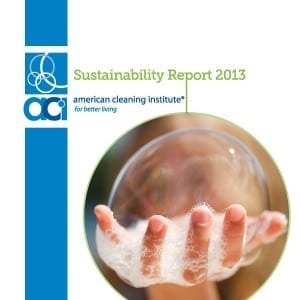 As a nonprofit trade association representing U.S. cleaning product makers and suppliers, the American Cleaning Institute (ACI) uses its Sustainability Report as an opportunity to highlight its  commitment to fostering and encouraging sustainability across the industry, as well as to provide aggregated environmental metrics data that allows companies to internally benchmark against industry metrics. While many ACI members issue sustainability reports and statements that describe corporate efforts to reduce their environmental footprints, ACI ties hard data from corporations into a report covering overall industry efforts and programs.

A major challenge was ensuring that all ACI members had the opportunity to be represented in the Sustainability Report. In order to provide a comprehensive picture of sustainability efforts across the cleaning products industry and effectively communicate with ACI members and other stakeholders, ACI created both a print and online version of the report, which enabled stakeholders to read the report in their form of choice, and compiled an online flipbook of 32 profiles illustrating how ACI members demonstrate sustainability throughout their companies. This gave all member companies, even those that had not participated in the Sustainability Metrics Program, the opportunity to be represented in the report.

As a result, ACI has seen a 25% increase in the number of companies who submitted metrics in 2013 that will be reported on in 2014—making the 2013 report a successful PR campaign in itself.