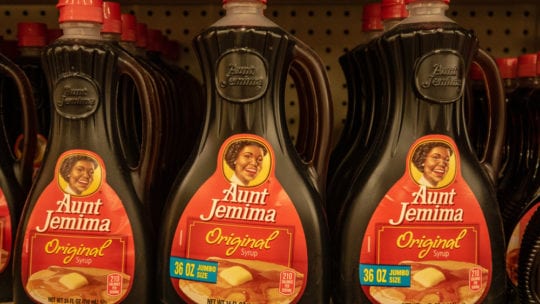 In February 2020, Land O’Lakes, a brand of butter known to most American households, quietly changed its packaging. The Minnesota-based company removed its historic Native American Butter Maiden, an illustration dating back to 1929, in favor of a farmer-forward design.

Fast forward to June 2020. The resurgence of the Black Lives Matter movement caused many businesses to pause and take stock of their company’s values and representation. This week, Quaker Oats announced it will rebrand the popular maple syrup, Aunt Jemima, and Mars, Inc. announced the same for its Uncle Ben’s rice products. Other products including Cream of Wheat and Mrs. Butterworth’s appear to be following suit.

"We recognize Aunt Jemima's origins are based on a racial stereotype," Kroepfl said. "As we work to make progress toward racial equality through several initiatives, we also must take a hard look at our portfolio of brands and ensure they reflect our values and meet our consumers' expectations."

Brands like Aunt Jemima and Uncle Ben’s have a prime opportunity to make a statement to consumers with a meaningful rebrand. LeKeith Taylor, senior vice president, brand innovation and impact at Porter Novelli, said that with two household brands leading the conversation, people will certainly be paying attention.

"Given the social and political climate we're in, Aunt Jemima and Uncle Ben’s rebranding efforts will be under a larger microscope, both from a media perspective as well as a consumer perspective," Taylor said. "People are going to have a point-of-view, so I would move forward with a great deal of thoughtfulness and patience. Thick skin is going to be important because the process will definitely have some bumps along the way."

Taylor acknowledged that before any details of a rebrand take place, conversations with a variety of stakeholders are most important.

"If I were leading the charge, I would engage in conversation with constituents from every part of the supply chain from internal stakeholders, to packaging agents, to distributors, key retailers and consumers," Taylor said. "I would want to hear thoughts and insights directly from the people who have and will touch the brand. Their input is hugely valuable to fostering collaboration, buy-in and synergy with the process and may facilitate insights otherwise missed."

And that being said, consulting stakeholders from a variety of backgrounds will put the company on the best path forward.

"Diverse perspectives are absolutely critical, which is why multiple stakeholders should be engaged," Taylor added. "This will help shape a new way of thinking that doesn’t stay relegated to internal stakeholders. It’s a vulnerable sandbox for a brand to play in but it’s 1000 percent necessary to support future success and growth."

More Than a Name

With the Aunt Jemima name hanging in the balance, a rebrand should constitute more than a knee jerk reaction. Given the product itself is not changing, a rebrand needs to be approached with thoughtfulness and empathy.

"Consider what you want to stand for," Taylor said. “What kind of story do you want to tell? What kind of brand visuals and tone do you want to deploy? Is there something interesting or unique to be done with the packaging? What efforts do you want to support? Don’t just change the logo and name. Use this as an opportunity to create a purpose driven brand.”

Taylor, who has consulted with everyone from Nike and American Express to entertainer and actor Common on brand development, is no stranger to the process of a public rebrand. He provided PRNEWS with some necessary do’s and don’ts.

As other companies like Crayola and Band-Aid have recently incorporated diversity into their products, we shall see who else follows suit. Could it be the National Football League’s Washington Redskins, whose fans and adversaries have clamored for a name change for years? Might Kentucky Fried Chicken permanently rethink Colonel Sanders? Every brand has the opportunity—and some would say, responsibility—to take a close look at its messaging and values during this time of cultural innovation and modification.