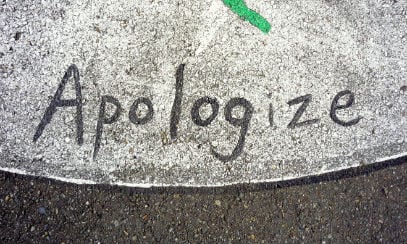 One of the tools in the crisis communicator’s toolkit is the apology. We've seen a slew of apologies lately in the midst of the coronavirus pandemic and the racial pandemic. Most PR pros know the basics of a good apology. Here's a quick review:

Seems obvious, right? Ask actor Kevin Spacey, who did more deflecting than apologizing in a note to fans, seeking their understanding in the face of charges that he was a sexual predator. The public blasted him for his poor apology and Spacey's reputation declined even more.

Use plain language. Dispense with legalese and corporate speak. In addition, you are not apologizing when you say something such as, ‘I’ve embarrassed my family, my friends and my company.’ That’s not an apology. Use the words I apologize. New England Patriots owner Robert Kraft infamously issued a non-apology apology this way. Kraft was caught on video visiting a house of ill repute. Twice.

A situation like that sometimes is referred to as bad facts. Such facts are pretty much indisputable. Another example also is related to football: the death of U of MD football player Jordan McNair after a workout.

In a case where bad facts are caught on video, it’s important to apologize promptly and authentically. Unfortunately, Kraft waited weeks before he apologized. On the other hand,  the Patriots communicated promptly upon hearing the story initially. The team's spokesman immediately denied it. Then the videos surfaced. Oops.

While it's true that Kraft kept his job, he owns the team. His lawyers were the best money could buy. Should a small or mid-size brand wait for weeks to apologize, and then issue a non-apology apology, the results likely will be worse.

This advice applies on several levels. One, as we saw above with Mr. Kraft, respond with a heartfelt apology quickly after an incident. Avoid waiting too long. The delicate part, of course, is how long is too long? You never want to respond too quickly during a crisis. Study the situation, engage in social listening before communicating. But make it fast.

In addition, in your apology note, adopt the journalist’s inverted pyramid writing style and apologize toward the top of your statement. Avoid burying an apology at the bottom of your communication.

Similarly, your apology need not be more than about 200 words. Allow the reader to get to your apology quickly. People are reluctant to read long messages. Chances are, they'll not wade into a lengthy apology note.

Use the First Person

When you apologize, do so in the first person. There’s nothing worse than an apology in the third person or in passive voice.

Make Sure It's a Person

If your crisis includes victims, make sure you address them in your apology. And don’t try to sound authentic in your apology. Be authentic. The joke—'Life is all about honesty. Once you can fake that, you've got it made.'— is just that, a funny aphorism. It doesn't work in PR. Honesty is something you can’t fake. More than that, if you try to fake authenticity, the media or social often find out.

The public wants to know what you're doing to ensure the situation won't happen again. In the apology, make certain you announce steps you're taking—an internal investigation, a production stoppage, firing someone on putting the person on administrative leave pending an investigation, etc.

Let's look at a few apologies and decide whether they worked or not.

Last week in suburban Washington, DC, several young children wrote messages supporting #BlackLivesMatter on their street. Similarly, they wrote supportive messages on the driveway of their parents. A neighbor called the local government to request removal of the message. Arlington County workers removed the street writing on Juneteenth. When the incident gained local press coverage, Arlington County issued this apology:

"We apologize for this unfortunate situation, particularly on such an important day, Juneteenth. Our crews were following policy to remove markings, regardless of the message, on County right-of-way in response to a received complaint. None of the markings were removed from private property.

We understand the deep feelings that are present in the community. Our mission is to deliver public services based on established policies in a consistent manner. We're reviewing our policy. Our crews take great pride in keeping Arlington clean and safe."

Not bad. The apology was issued quickly and gets to the point fast. In addition, the explanation for why the messages were removed is made clear. It's a bit silly, but it's clear. In addition, it's also clear that the County is "reviewing" its policy to make sure something like this doesn't recur.

On the downside, the writer is nameless and faceless. In addition, some of the writing is stilted. "Our mission is to deliver public services based on established policies in a consistent manner." And why the virtue signaling in the last line? "Our crews take great pride in keeping Arlington clean and safe." Well, yes, we hope so, but it's irrelevant. Grade: B-

Some, but not all, of several brands in Britain have done well with recent apologies. Greene King, the country's leading owner of pubs, apologized when historians found one of its founders benefitted from the slave trade. The company was founded in 1799. Its founder, Benjamin Greene, owned several plantations.

“It is inexcusable that one of our founders profited from slavery and argued against its abolition in the 1800s,” the company's current CEO Nick Mackenzie said June 17. “We don’t have all the answers, so that is why we are taking time to listen and learn from all the voices, including our team members and charity partners as we strengthen our diversity and inclusion work.”

"Greene King will make a substantial investment to benefit the BAME (Black, Asian and minority ethnic) community and support our race diversity in the business...we employ people from across the UK from all backgrounds...racism and discrimination have no place at Greene King.”

Well done. A prompt apology using strong language from the CEO. Instead of waiting "for  all the answers," the company apologized and now is listening and learning. Adding to the good words, the company is making a donation.  Moreover, the apology ends with a flourish: "Racism and discrimination have no place at Greene King." Grade: B+

Not quite as good was a spokesperson's apology from Barclays, the British bank. Its founder, David Barclay, campaigned against slavery in the late 1700s, though many years later the bank made acquisitions of financial institutions with ties to the slave trade.

“We can’t change what’s gone before us, only how we go forward,” a Barclays spokesman said.

Ouch. True, you can't change history, but you can apologize. Grade: C

Actor and comedian Jenny Slate apologized recently for voicing a Black character, Missy, on the animated TV series "Big Mouth" (see below). Slate lays out her reasoning for taking the part–her logic was flawed, she writes–and why she's departing. Black people should play Black characters on TV shows, she writes in an Instagram post.

Her apology is timely, in the first person, eloquent and the tone is heartfelt. She also discusses her future–"I will engage in meaningful anti-racist action...and do my best to take responsibility for the ways that I am part of the problem."