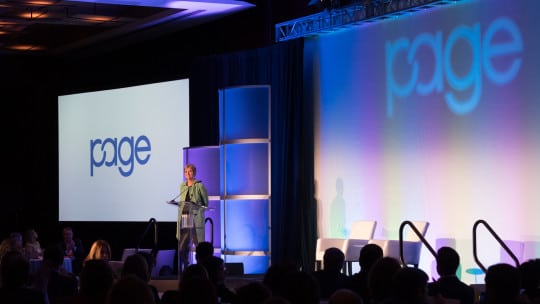 The organization formerly known as the Arthur W. Page Society hosted its annual Spring Seminar this week at New York City's Conrad Hotel, bringing together communicators from across the globe for two days of panels, keynotes and breakout sessions that addressed the theme "Are You Future-Proofed? Disruption, Innovation and the CCO." The organization also debuted its rebranding initiative, renaming itself Page and rolling out a new logo.

Recently elected Page chair Aedhmar Hynes told PR News she initiated a listening exercise with Page members, and that her perspective on where Page should go was reflective of their feedback.

"Doing this very much gave me a perspective that now is a good time to refresh what Page stands for," said Hynes. "Our mission has always been to elevate the role of chief communications officers within business but we also wanted to look at what Page's role in that [is], and how we, as an organization, support CCOs."

The majority of that feedback , she said, speaks to the notion that communicators are more essential now than ever.

"If you look at things like March for Our Lives as evidence—we have children leading movements of change, we have issues of sexual harassment at center stage, where historically it's been a taboo or silent topic," she said, also citing the recent data scandal surrounding Facebook. "You see communications at the center of so many aspects of industries today. That's the feedback we were getting—the world is changing rapidly and the role of communications is important in being the conscience of the brand, in a world demanding more conscious capitalism."

Similarly, the seminar's first day explored its future-proofing theme. Tim Brown, CEO of global design firm IDEO, explained the concept of "design thinking" as a way for leaders to refresh the structure and organization of their business from a more practical perspective. Design thinking is proactive, not reactive, said Brown; you must have new ideas, act on new ideas and share new ideas. When leaders spread purpose, they create alignment that shapes a better-designed infrastructure for their business.

"Creative confidence means possessing both the ability to have new ideas and the confidence to act on them," he said.

Among the afternoon's peer discussion sessions, some attendees examined the looming threat that fake news has on communications, and how it betrays the first of the society's Page Principles—tell the truth. One peer group came to the conclusion that communicators must respect the distinction between deliberately constructed fake news and unintentionally inaccurate reporting, the latter of which is an unfortunate reality because "the first draft of history is often sloppy." Either way, one communications executive said, the fake news epidemic has created a generational paralysis.

Later that afternoon, APCO Worldwide global co-lead of digital practice Imad Lahad provided attendees with an introduction to emerging artificial intelligence tools that are directly impacting communicators through automation. From the social media content optimization platform Cortex to automated digital video platform Wibbitz, AI is at the center of a shift from traditional media models to what Lahad calls "object-based media," or media consumed directly through personal devices.

On the next panel, "What CCOs Need to Know about the Future of Media," Charlene Wheeless, Bechtel's principal vice president of global corporate affairs, moderated a conversation among Mike Allen, co-founder of digital publication Axios, Boston Globe CSO Peter Cherukuri and the Washington Post's director of strategic initiatives, Jeremy Gilbert, that folded in bits of every future-focused topic from the day.

Pressed to quantify the ethical considerations shaping AI in the newsroom, Allen said communicators need to consider how emerging AI tech relates to what author Walter Isaacson called our "moral processing power." Gilbert explained the strategy behind the Washington Post's Heliograph AI news robot—have it report on the mundane stories that wouldn't benefit from a human touch. This lets journalists—and CCOs—focus on stories that require a more nuanced, human degree of attention.