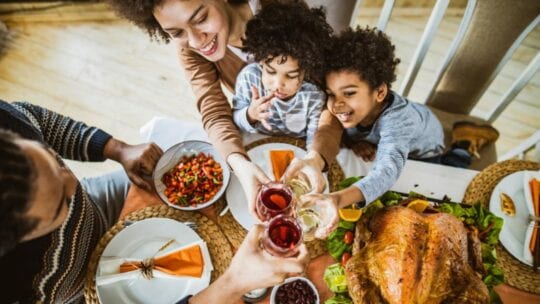 For an American tradition only one year shy of its 400th anniversary, Thanksgiving is staging a comeback at a time we need it most. Who would have thought a global pandemic could restore meaning to a holiday that was fast becoming a speed bump on the road to Christmas?

In 1621, the Wampanoag tribe and Plymouth colonists came together for a harvest feast born of celebrating survival, improving fortunes and gamesmanship. The history has Chief Ousamequin fending off internal and external rivals through cooperation with the English. While the politics discussed—or suppressed—at more recent Thanksgiving gatherings may not have surprised him, the commercial focus might have.

That's because Thanksgiving became Black Friday Eve or even Brown Thursday. Yet COVID-19 has made swift work of Black Friday, taking Cyber Monday along for the ride.

Now to be sure, it had help. Even before this year, Amazon Prime Day and its copycats, online and in-store deals that emerged before the leaves hinted at their fall colors, and a rush toward the holidays, stretched the shopping season. Still, the door busters and wrap-around, pre-dawn lines at Walmart persisted. Until now.

This November 26, the parking lots will be emptied at the likes of Walmart, Target, Best Buy, Kohl’s, Dick’s Sporting Goods and Home Depot. Rather than fight the trend, the National Retail Federation has leaned in, announcing its Shop Safe, Shop Early campaign and a New Holiday Traditions initiative. Travel will be down and celebrations are expected to be smaller.

Illness, job losses, a divisive presidential race and semi-isolation have battered consumers. As such, they are seeking bright spots in an otherwise dark climate. It will be an atypical Thanksgiving, potentially opening doors for brands that embrace the change.

68 percent of Americans say they expect to celebrate the holiday differently in 2020, according to market research firm Numerator. However, communicators should not mistake difference for indifference.

An NCSolutions survey of 2,000 US adults indicates that nearly four in 10 believe Thanksgiving is more important than last year, with about the same percentage believing it equally important. That could explain why three-quarters of the more than 1,500 U.S. consumers surveyed in the latest Accenture Holiday Shopping Survey said they want retailers to close on Thanksgiving Day.

America needs a break, and that turkey can’t reach the table fast enough it seems. It begs the question: Are there opportunities amid the newfound return to family? Yes, if organizations know how to read the room. It's important to tap into core values that never really disappeared. This includes a nostalgic desire for the familiar in unfamiliar times.

As we write, more than a few are showing they have what it takes to navigate the uncertainty:

So, as much as 2020 has created untold havoc and pain, it has also led to the reemergence of Thanksgiving. A rebirth of time dedicated to close family and friends. A moment to step back from the day-to-day whirlwind of PR, and instead focus on the good in our lives and share genuine hope for what’s ahead. Let’s give thanks to that.

Mike McDougall is president of McDougall Communications. He’ll be tucking into the turkey at home, as will his firm, celebrating a four-day weekend free of email, Zoom meetings and texts.