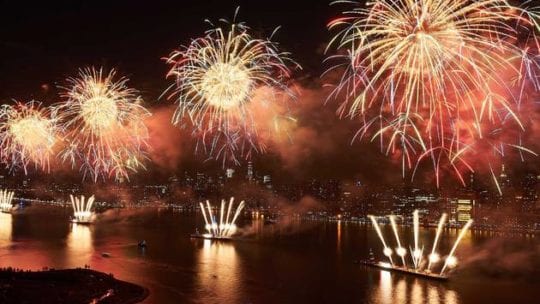 As journalists, we’ve heard a variation on this statement several times from brand communicators during the pandemic: “Most of my team is furloughed, so, I’m very sensitive to appear like I’m seeking publicity for me personally, or that we’re managing fine without our colleagues–we’re only just keeping it together. So, I’d like to pass on participating in your webinar or being quoted in your article.” That’s understandable and reasonable. It’s an example of PR pros reading the room, avoiding tone-deafness.

On the other side of the ledger, you have to wonder about the optics of Macy’s, a retail brand struggling prior to the pandemic (details below), spending money on July 4 fireworks as thousands of its employees lose their jobs. In addition, did the uproar over illegal fireworks fail to register with Macy's or New York City mayor Bill de Blasio?

To be accurate, the retailer’s July 4 fireworks began June 29, in Long Island City, Queens, just on the other side of the East River from Manhattan. They will follow nightly in each of the five boroughs of the city, culminating in a best-of display for Independence Day. Plans call for short fireworks displays at unannounced venues in an effort to avoid large crowds gathering and making a mockery of social distancing.

You can anticipate a problem, of course, at least after last night's display. People expect July 4 fireworks at major venues. June 29 fireworks at unannounced sites, not so much. For those who hadn’t heard about Macy's' revised plan, there was some panic upon hearing and seeing fireworks.

Forget about tone-deafness, garden variety deafness was the issue for some. Several veterans complained that the booming of fireworks, especially in obscure areas, is a psychological threat.

To be fair, New York City understood the problem in part. The mayor's office said it would alert residents the evening of each display as to approximate locations. Again, the late communication was intended to avoid large crowds gathering.

Fireworks for a Month

With six nights of fireworks it can be difficult to listen to anything, much less the social conversation. Still, how did Macy’s miss the fact that one of the city’s recent pain points is illegal fireworks? Complaints are up more than 200 percent this month in New York City, Gothamist reports.

Can anyone explain why we’re getting Macy’s 4th of July level fireworks every night in NYC for the past 3 weeks now? Asking for a friend. It’s been nonstop from 8pm-3am in all 5 boroughs. #nycfireworks #fireworks #fireworksnyc pic.twitter.com/uPj5BOckgw

The issue caused so much anxiety, Mayor Bill de Blasio announced a task force on June 23 to investigate and crack down on illegal fireworks in the Big Apple. Oh, those pesky New Yorkers. Several jumped in their cars that night, idled outside the mayor’s home, and honked their horns until the early morning. If illegal and legal fireworks were going to disrupt their sleep, then the mayor’s shut-eye would suffer too.

“Illegal fireworks are both dangerous and a public nuisance. We’re cracking down on this activity at the source to ensure the safety of all New Yorkers & the ability of our neighbors to get some sleep.”

Moreover, illegal fireworks issues have become ugly. Some argue that the fireworks' high quality indicates they are not random, but are tied to organized movements. Some complain the NYPD is ignoring illegal fireworks as a not-so-silent protest against defunding the police.

More bad timing. The day de Blasio announced the illegal fireworks task force, he also touted Macy’s’ plan for six nights of, yep, fireworks. He said it would be a legal way for New Yorkers to celebrate. As you can imagine, social media blasted the move (no pun intended).

This whole #fireworks plan is dumb, dumb, dumb. Nobody wants this.

Watch out for the surprise explosions tonight #LIC 🤦🏻‍♂️ https://t.co/6bD9FKJ8AP

In February, Macy’s announced 2,000 job cuts and plans for 125 stores to close over three years. The number of sales positions associated with these closings was not disclosed. Specifics are expected tomorrow, during a Q1 analysts’ call.

In addition, Macy’s said in February its dot-com headquarters and corporate headquarters would close and be consolidated into other buildings. Those cuts are estimated to save Macy’s $1.5 billion annually by 2022.

In 2018, the 150-year-old retailer hired brand experience officer Rachel Shechtman. The move was heralded as a reinvention of the brand. Shechtman was among the 4,000 let go last week.

So, with all its financial bad news and the month-long angst over fireworks in New York City, does Macy's and the city continue with fireworks? There are arguments on both sides of the question.

The fireworks display from Macy's is a July 4 tradition. Continuity is a large part of any tradition. Perhaps going ahead with the fireworks is a sign that the brand and New York City will survive. That’s an important message, of course.

On the other hand, a communicator at the table might have told Macy's that six nights of fireworks at this moment could be perceived as too much, even for a city that doesn't sleep.