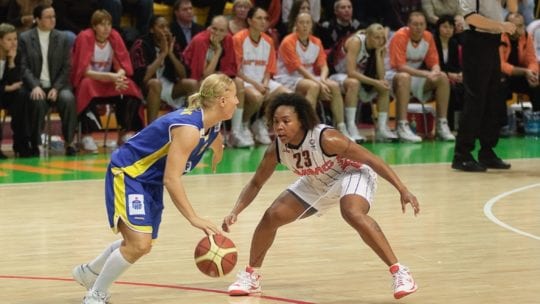 The WNBA and its players association announced Monday that the league is dedicating the 2020 season to social justice, honoring the Black Lives Matter movement and the #SayHerName campaign.

The focal points of the campaign include the league displaying “Black Lives Matter” prominently on courts when play resumes late this month and having players wear special uniforms “to seek justice for the women and girls, including Sandra Bland, Breonna Taylor, Vanessa Guillen and many more who have been the forgotten victims of police brutality and racial violence.” In addition, players will wear warm-up shirts that say “Black Lives Matter” on the front and “Say Her Name” on the back.

The league and players association also came together to launch a “Social Justice Council” to drive continuing conversations about race, voting rights, LGBTQ+ advocacy and other issues. The council will include players; activists and community advocates will advise it.

The joint effort reflects a long history of WNBA players at the forefront of social issues. Most notable was their fight for better pay. The players received contracts that increased paychecks 53 percent, raised the base salary to $130,000 from $116,000 and secured maternity benefits.

Following the announcement, Sen. Kelly Loeffler (R-Ga.), a co-owner of the Atlanta Dream, urged the league to reverse course, voicing her opposition of the Black Lives Matter movement. The league responded in a statement, saying the senator is no longer involved in the team's day-to-day operations.

Loeffler’s statement sparked an immediate backlash from players, with the players association calling for her removal. Current and former players also expressed disappointment with her opposition to the league’s program.

I’m pretty sad to see that my team ownership is not supportive of the movement & all that it stands for. I was already sitting out this season & this is an example of why. I would love to have a conversation with you about the matter if you’re down?

I can’t believe I ever stepped foot in Kelly’s house and shared a meal with her. It’s actually really hurtful to see her true colors. I had no idea while I played for ATL she felt this way. Happy to own us as long as we stay quiet and perform 🤬👀 https://t.co/97jTbmuHda

One the one hand, you have the league and players association collaborating on one of the defining movements in recent memory—The New York Times reported that the 15 to 26 million Americans participating in protests following the killing of George Floyd comprise the largest movement in the country’s history. On the other hand, owners and leaders in some industries (the NFL’s Washington Rediskins and other sports leagues, for example) are pushing back on conversations happening inside and outside their organizations.

The lesson for communicators is clear: Regardless of your opinion, messaging from leadership and the company needs to consider employee concerns. If not, or you choose to make the conversation public, as Loeffler did, the risk of inviting outside criticism and brand damage runs dangerously high.