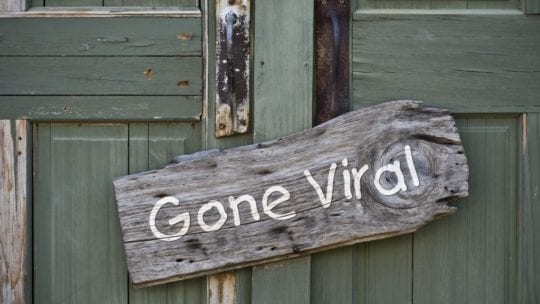 In a world where influencers-turned-stars and tales of ‘cancel culture’ dominate, it can seem like fame and producing the next viral hit should be important goals. Many brands chase ‘internet fame’ – whether through social content or partnerships with celebrities – but success stories like fast food Twitter wars or Carmax’s viral YouTube video remain elusive.

Even if the odds of success were higher, should ‘fame’ and virality be your goals?

I’m still surprised how often companies say their top goal is to become famous. For many brands, it is a misguided, waste of resources to try to become the internet’s next hit. This is particularly so for B2Bs.

Sure, finding ‘internet fame’ can attract a lot of eyeballs. The question is, though, are they the right eyeballs? If not, then the campaign isn’t going to make a big difference to your bottom line. How many cable networks succeeded when they tried to imitate "The Sopranos"? Not many.

2019 may have been the year of influencer culture, but in 2020, the quest for fame will begin to wane. Brands will shift gears and wise up.

Instead of looking for fame, brands will begin to realize they need to become famous with a smaller group of relevant people. Getting great content in front of the these people will be the ultimate sign of success.

By focusing on an audience that is relevant to your brand’s expertise and goals, rather than wider notoriety, your company can focus better. For brands, this means an audience that can raise awareness among decision-makers, drive leads and ultimately increase sales.

It’s important to remember that no matter how relevant or captivating the content, it won’t make a difference if no one in your target audience sees it. It would be like getting a billboard to advertise your blockchain product in Times Square. Millions of people might see it, but few will make corporate blockchain purchases.

It would be more effective to target a smaller group of people with relevant titles with LinkedIn ads. They’re much more likely to be interested in the content.Target content to a smaller audience that will engage with it.

Seeking the right kind of ‘fame’

With brands better understanding the value of targeted digital marketing, PR pros will have to better integrate content and digital services into the mix – especially as the lines between PR, marketing and digital continue to blur.

Many understand that content, social media, digital marketing, media relations and beyond do not work nearly as well in isolation as they do in tandem. The age-old saying is true: It’s better to be the big fish in a small pond. ‘Internet fame’ is fleeting, but fame among decision-makers who matter to you is priceless.