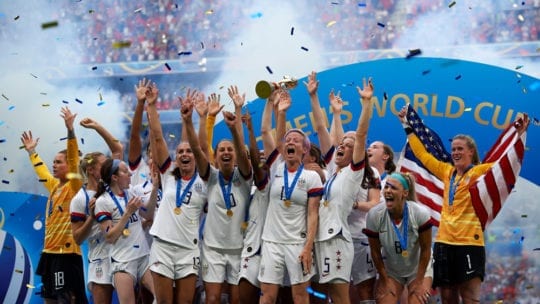 The United States Women’s Soccer Team victory tour might just be the envy of all campaign managers. The successful embrace of the team’s fight for equal pay organically resounded throughout the crowds at each appearance without any necessity for prodding. The team marched from East Coast to West Coast in 24 hours on July 10, beginning with a ticker-tape parade in the morning in New York City, and ending with an award for “Best Team” in Los Angeles at the ESPYS.

Support for the team to receive equal pay rang out through each appearance, including shouts of “pay them” while U.S. Soccer president Carlos Cordeiro addressed the crowd at City Hall in New York. Actress Sandra Bullock, ESPYS host and comedian Tracy Morgan, and tennis legend Billie Jean King all voiced their support in front of a packed auditorium and live international broadcast.

“All those in favor of equal pay, say I,” Bullock said when presenting the team with their award.

King addressed the team earlier in the show: “Keep fighting for equality.”

While celebrity and fan support never hurts when fighting for a cause, the team appearances inspired real media coverage. The publicity also sparked motion toward possible change in a lawsuit filed by the team against the U.S. Soccer Federation over gender discrimination. Moving the needle at a highly-publicized national level could also ignite change regarding regulation and reevaluation of pay for all industries, including the ever-present public relations gender wage gap.

In the United States, full-time working women still only earn 80 cents (on average) for every dollar men make according to the National Women’s Law Center. The PR industry is making some moves to close the gap, but the root of the salary problem stems from the top. A study from the Pew Research Center said women on the same level in PR still make $5,000-$6,000 less than their male counterparts.

Senior leadership salaries play a large part in the gender wage gap. Results from a Global Women in PR study revealed that although women represent 67% of the global PR industry, 78% of the CEOs in the top 30 PR agencies worldwide are men and that they also occupy 62% of seats at the PR boardroom table. The gap is even wider among ethnic minorities.

And women are not always comfortable negotiating for higher compensation. The study noted that 26% of women are “not confident” asking for a raise, compared to 13% of men.

Progress and what comes next

Momentum from the U.S. Women’s Soccer team could carry over with a big win on a national level. Eighteen states have already passed statewide salary history bans, prohibiting employers from awarding compensation based on past worth. Proponents of the legislation cite the experience, talent and enthusiasm potential employees bring to the table, allowing for a clean slate with each negotiation. This fuels a sense of worth from the moment a candidate receives an offer. Companies should be leading with a welcoming hand instead of evaluating candidates based on the way their former companies sized them up.

In 2018, PR agency association PR Council developed a Pay Equity Statement encouraging members to uphold its promise and develop and review policies to promote a gender-equal environment. The Council followed up in 2019 by publishing the progress of several agencies including BCW, Finn Partners, Jarrard, Inc. and Ketchum.

“David Jarrard, CEO of Jarrard, Inc., notes that the company was formed in 2006 by four partners—two women and two men. Since that time, three other partners have been named, all of whom are female. The composition of the firm itself is 75% female. The firm leaders are strong advocates of exceptional performance in the workplace and the company prides itself on rewarding opportunities to great staff—independent of gender consideration.”

Thanks to the continuous beat of messaging regarding the gender pay gap from not only the U.S. Women’s Soccer Team, but many PR pros as well, the battle won’t stop here. It will be interesting to see if gender pay bills continue to pass at the state and local level and how companies will incorporate them into their overall compensation strategies.

Will salary transparency play a larger role like it does at places like Buffer, Glitch and Whole Foods? Performance-based pay can allow those who win clients or projects more of an edge, no matter what gender they are. Let’s hope organizations put their money where their mouth is and “pay them.”