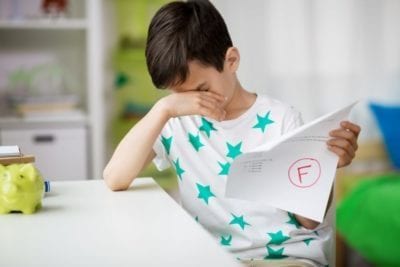 Never one to allow software companies like Zoom to steal its augmented reality (AR) lens thunder, Snap Inc.’s desktop offering has been picking up steam in the COVID-19 work-from-home era. Snap has already launched brand partnerships for its video chat lenses, including Universal and L’Oréal​, the latter of which has released eight new AR lenses for Snap Camera. These will be featured on the Snap Camera platform for one week in a dedicated “beauty” area. Snap recently reported a 30x increase in downloads of Snap Camera, along with a 20% increase year over year of users of the mobile app. Kudos to Snap for doing what differentiated it as a platform in the first place—goofy AR face lenses—while offering remote workers something to smile about. (And the ad revenue is nothing to scoff at, either.) 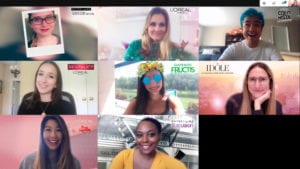 Reuters: An appreciative B+

It was 13 months ago when President Trump tweeted that the media was “truly the enemy of the people.” The president’s tune hasn’t changed, as his semi-suspended White House Coronavirus Task Force briefings demonstrate. Yet for homebound citizens, in the U.S. and abroad, the media has become the de-facto lifeline to the world outside. Owing to COVID-19-related layoffs and furloughs, many newsrooms are short-staffed, forcing journalists to work harder than ever to cover the pandemic. On Monday, Reuters launched a social campaign to thank journalists for their work (#thankyoujournalists). Produced in-house, the 60-second launch video features the obligatory piano music and footage of empty streets as well as journalists, editors, videographers and photographers, some risking their health on the front lines. It’s not a great video, but the thought is excellent, as a strong response on Twitter can attest. Joining the chorus of appreciative tweets were numerous PR and media organizations as well as high-profile tele journalists Ali Velshi (MSNBC) and Christiane Amanpour (CNN and PBS).

So many of us are missing the convenience—and extensive menus—of our local favorite diners. Heinz, a staple of the quintessential diner, has stepped up to help. It recently said it would commit $1 million to independently owned and operated diners (in the form of $2,000 grants) to the first 500 nominated by fans.

The nomination form is simple and quick for fans to enter their picks, and according to the rules, chains are not eligible (straightforward comms that didn’t seem to apply to the PPP loans that large chains received).

To the diners that have welcomed us in for decades, we now open our arms to you. Help us by nominating your favorite diner to receive support at https://t.co/HXa9YaE9RU #StandWithDiners pic.twitter.com/pDyRexgz2o

Hilton announced its cleaning standards for the COVID-19 era Monday, detailing steps it will take at its properties as talks about reopening advance in much of the world. The hotel chain partnered with Mayo Clinic and the makers of Lysol to revamp cleaning procedures. Marriott made a similar move last week, and these brands are at the forefront of communicating with consumers about reopening. With the situation varied depending on geography, businesses will have a large share of the burden of education as people begin to reemerge. Hilton’s statement had two key pieces that anyone can learn from: a clear, bulleted list of new standards, and a graphic showing high-touch areas in rooms that will receive deep cleaning. With all the confusion surrounding COVID-19, businesses have the opportunity to make consumers’ lives a little less stressful through simple and transparent communications like this. 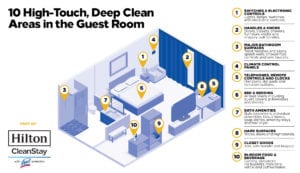