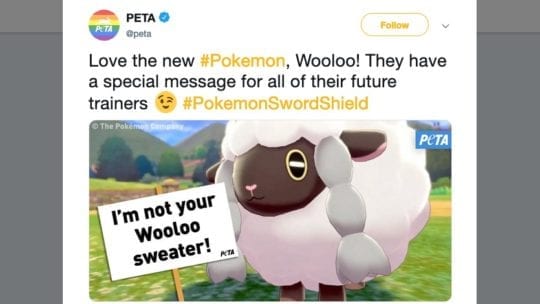 People for the Ethical Treatment of Animals, or PETA, is among the most well-known nonprofit organizations in the world. PETA's awareness comes from highly visible protest campaigns including inserting itself into the national debate about SeaWorld's treatment of orca whales after the documentary "Blackfish" was released, or pushing for the iconic Nabisco animal crackers box to be redesigned without a cage. In both instances, the nonprofit's efforts were successful—killer whale shows are no longer at SeaWorld, and the animal crackers box was changed.

Not all of PETA's efforts are successful, however. The nonprofit also has a knack for overreaching to make a big deal out of things that the average person wouldn't consider an animal rights issue. One recent instance includes sharing a meme of idioms it deemed offensive for suggesting animal cruelty—"kill two birds with one stone," "beat a dead horse,"—and suggesting PETA-friendly phrases that could replace them.

Words matter, and as our understanding of social justice evolves, our language evolves along with it. Here’s how to remove speciesism from your daily conversations. pic.twitter.com/o67EbBA7H4

PETA's sincere issues with "speciesism" aside, the post went viral for all the wrong reasons, and many felt that the nonprofit was woefully off-base in thinking this was a real issue. PETA wanted to show how animal cruelty was in embedded in our collective cultural subconscious, but the optics just found them being regarded as silly instead.

Last week, something similar happened when PETA tweeted a meme highlighting a character from the next installment in the upcoming "Pokémon" video game series, a sheep pokémon named Wooloo:

Love the new #Pokemon, Wooloo! They have a special message for all of their future trainers ? #PokemonSwordShield pic.twitter.com/EyRst7Hlee

Suffice to say, video game fans weren't having it.

Oddly enough, this isn't the first time that PETA has targeted "Pokémon" in its campaigns. Taking issue with the game's central theme, "Gotta Catch 'Em All," wherein a trainer travels the region capturing the pocket monsters in tiny little globes called pokéballs, PETA has spent money and resources in protesting the hit series. In 2016, PETA declared its offices a "safe zone" for users hoping to catch pokémon in the hit augmented reality game, "Pokémon Go." The nonprofit also launched a parody video game of  its own, wherein freeing pokémon is the main objective.

"PETA works to reach people about animal rights wherever they are and through every medium, and we've been active in the gaming community for many years," the organization's EVP, Tracy Reiman, told PRNEWS. "When we point out that Tanooki shouldn't be skinned for anyone's suit or that turkeys' throats shouldn't be slit for Thanksgiving dinners, gamers can't seem to stop reading, talking, texting, or tweeting about it. Tens of millions of players fought the evil Col. Sanders in Super Chick Sisters, battled to free 'em all in Pokémon Black & Blue, and played other PETA games that shine a spotlight on the worst abuses animals face, and we hope gaming companies will join us in using their powerful platforms to advocate for animal rights."

Insert your brand into what's trending with extreme caution

PETA generates heaps of earned media coverage just by inserting itself into national stories or cultural moments involving animal welfare. It's a tactic used by publications and media brands to latch onto search keywords and momentum that another topic has already generated. Its longstanding anti-Pokémon campaign, however, should remind PR pros that there's a right way and a wrong way to approach this. The connection must be organic, easy to tease out and not feel forced. The tone of the communication must also be consistent with the messaging.

On both fronts, this anti-Pokémon campaign undermined the organization's core message to its audience. PETA  ignored the core message of animal respect and welfare that runs through the video game series, focusing on the 'capture' action as the target of its protest, which only further infuriated fans of the beloved franchise. Moreover, the campaign was derided as being particularly vicious and arbitrary for PETA—attacking a children's brand about fictionalized creatures is low fruit comparing to calling out SeaWorld's orca abuses.

Just because there seems to be a parallel between your brand values and what's going on in the news, doesn't mean that parallel is worth highlighting. If the target of your campaign doesn't help your brand frame its message in a voice that's consistent with its intentions, and risks making your stance look silly or overwrought, it's likely not worth the trouble of highlighting.

PETA has shown its strength at generating high levels of engagement with its campaigns and social footprint, but it spends far less time actively engaging its detractors and correcting what it considers misinformation. Sure, there are the trolls who take an issue with the nonprofit's larger mission worth ignoring, but PETA would do well to know when to quit certain campaigns and listen to why people are upset with them. "Pokémon" fans have dragged them in the past for reaching hard to smear the video game brand, but PETA has continued its course in forcing its message to the video game series' audience.

Moreover, social listening means actually hearing what your audience is saying and responding in kind—not linking them back to information hubs on your site that you have set up to to do damage control:

PETA has enough controversy attached to its practices, and picking fights with fictional video game monster trainers doesn't help. Instead, the nonprofit should take more calculated risks in who, or what, it chooses to engage with online. It's one thing to take an informed, authentic stance on something that lines up with your organization's values. It's another issue entirely to piggyback on what's popular for clicks that undermine the legitimacy of the work you're doing.

This story has been updated to include a statement from PETA