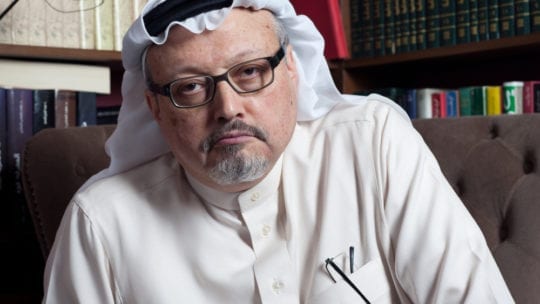 If journalism is the "first rough draft of history," you have to wonder how historians, years from now, will interpret news accounts surrounding the alleged murder of journalist Jamal Khashoggi. The story barely registered in early October, but now is a page-one item.

As the now-ubiquitous video shows, The Washington Post contributor and U.S. permanent resident walked into the Saudi consulate in Istanbul on Oct. 2. Apparently he never left alive. Saudi Arabia reportedly is responsible for his death.

[Update I: October 19, 2018, 7pm ET: Saudi television is reporting that the Saudi government admits Khashoggi is dead, apparently after a fight with security agents.]

[Update II: October 4, 2019, 4pm ET: One year after Khashoggi's death his body still is missing. Several intelligence agencies concluded he was murdered and dismembered inside the Embassy. In addition, the CIA says with "high confidence" that Saudi Arabia's Crown Prince Mohammed bin Salman (MBS) ordered the murder. He has denied his culpability. A sham trial is being held in Saudi Arabia. It receives little media coverage.]

As awful as the Khashoggi story is, it is interesting to ponder how and why the murder of one person has gained so much attention. Atrocities on a larger scale, some that Saudi Arabia perpetrated, receive scant media play. In addition, the Khashoggi story arguably has put the U.S.-Saudi relationship on unstable ground, though much larger Saudi misdeeds did not.

These are some of the questions behind an interesting story in the NY Times on the subject. It quotes Soviet dictator Josef Stalin saying, "The death of one person is a tragedy, but the death of one million is a statistic."

From a communications viewpoint, personal stories are an effective way to translate a message. This might explain why the Khashoggi incident has pierced the crowded news cycle when much larger atrocities fail to do so.

And you wonder about the story's legs had the video of Khashoggi entering the consulate been unavailable to television news and social media.

Also part of this story are brands and CEOs. Many have pulled out of next week's high-profile Saudi investment conference in Riyadh, a pet project of the Crown Prince. Several art museums have decided not to accept funds from Saudi benefactors.

It's not a secret that a growing portion of consumers, particularly millennials, want brands to stand for something beyond their products and services. The exodus from the Saudi conference is notable in that regard. It seems proof positive that brands are keenly aware of the need to appear socially responsible.

It is also noteworthy to recognize that Uber's CEO, Dara Khosrowshahi, was one of the early CEOs to pull out, well before the story reached fever pitch this week. His move was particularly gutsy considering the Saudi sovereign wealth fund invested $3.5 billion in Uber in 2016.

One part of the breaking news on this story is that U.S. Treasury Secretary Steven Mnuchin decided Thursday to pull out of the conference.  Earlier today he said he'd attend a different conference in Saudi Arabia, ironically one about anti-terrorism.

President Trump, very much the way brands did in the early days of this story, monitored the growing social conversation. Initially the president downplayed reports of alleged Saudi involvement in Khashoggi's death. He and the Crown Prince enjoy a strong relationship. As little as two days ago the president slammed Saudi detractors. His stance changed Thursday, apparently prompting his Treasury Secretary's exit from the investment conference.