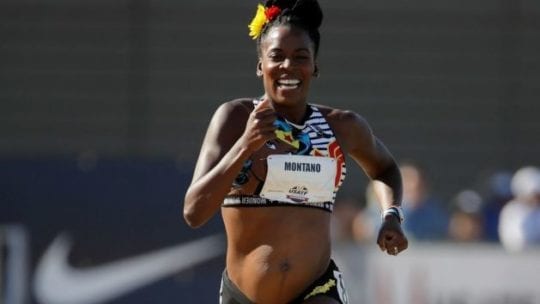 Nike unexpectedly found itself in the midst of a major PR crisis when The New York Times published an opinion piece on Mother's Day. It featured several female athletes who are sponsored by Nike, focusing on the fact that Nike did not provide these athletes with paid maternity leave.

The brand's initial response was a bit defensive, with Nike claiming it "changed its approach in 2018 so that athletes are no longer penalized." However, Nike declined to say whether it wrote those changes into its contracts.

Nike has now released a statement saying that all future contracts will indeed be written to protect pregnant athletes from discrimination.

"Our mission has always been to support athletes as they strive to be their best," Nike said. "We want to make it clear today that we support women as they decide how to be both great mothers and great athletes. We recognize we can do more and that there is an important opportunity for the sports industry to evolve to support female athletes."

In this action, Nike is clearly following the crisis management playbook and changed the narrative in its favor in its quick remediation. What can we, as PR professionals, learn from this situation?

See PR crises as teachable moments. It's unrealistic to think that your brand or client will never find itself in the midst of a PR crisis. Even if you have a crisis management plan in place, it's possible to overlook things that could prompt negative sentiment (such as when Nike competitor Adidas released an all-white shoe called "Uncaged" during Black History Month). These situations are an opportunity for a brand or client to test its crisis plan and see where gaps exist.

Respond quickly. A PRNEWS survey in February showed that 54 percent of PR pros surveyed felt that speed of response was one of its top three biggest challenges in crisis management. An effective crisis management plan will help to speed up the appropriate response. Nike's response came right on the heels of the backlash and helped to turn the narrative while the brand was still in the news.

Be humble. Nike may have seemed defensive at first, saying it was already supporting its pregnant athletes through a policy change in 2018, but it came back to its audience with humility and acknowledgment that it could, indeed, do better. And would. If your brand or your client finds itself in a situation where it's clear it went in the wrong direction, course correction paired with an apology can flip public sentiment.

Understand your audience. Nike has a great, data-informed read on its audience, which tells the brand to keep its messaging progressive and supportive of causes such as gender equality. A commercial released in February, for example, was celebrated for showcasing "women at all stages of their careers, from childhood to motherhood" and a Mother's Day commercial released this year promoted gender equality. The brand moved quickly to fix the disconnect between its pregnancy policy and its progressive brand positioning.

Nike's quick action and new policy for pregnant athletes is a great example of PR done right. That the brand found itself in hot water is irrelevant—it's what Nike did in response to that situation that matters.