In what's been a regular occurrence for months, inconsistent messaging from the White House about the novel coronavirus continued during the weekend, resulting in a confused public.

To recap, it's clear President Trump wants to re-open the country. Late last week, he issued guidelines for a phased approach to do so. His April 16 blueprint appeared to be reasonable and have the backing of the CDC and medical members of the White House’s Coronavirus Task Force.

The next day, however, the president’s messaging centered on politics rather than science. In a series of tweets, the president urged liberation, rather than a staged re-opening, of 3 states: Michigan, Minnesota and Virginia. Messaging about the deliberate, phased opening outlined in the April 16 guidelines was AWOL. 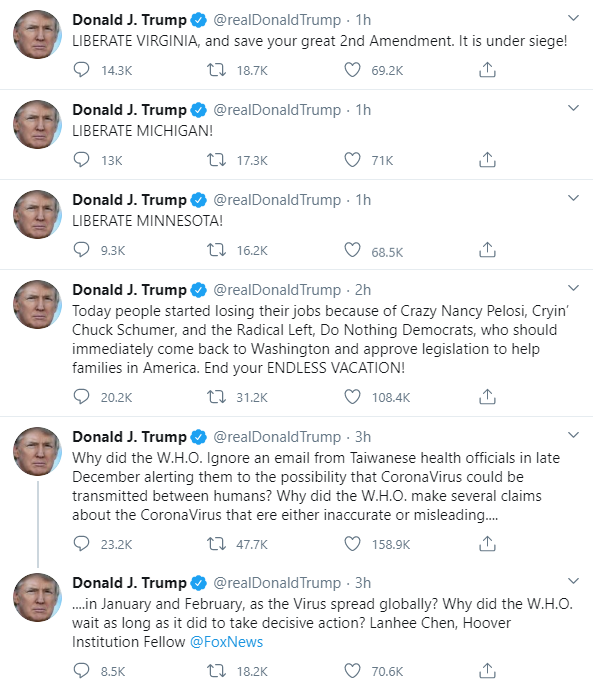 In addition, Friday on Twitter, the president blasted Democrats, China and the WHO for various coronavirus-related things.

PR crisis communications generally abhors brands and executives attempting to blame others for a crisis. Instead, standard PR advice is to own mistakes, avoid blame and issue consistent messaging that provides clear guidance.

This morning, again the message was mixed. VP Mike Pence mentioned both the phased-in guidelines and the need to get Americans back to work quickly. On NBC's "Meet The Press," Pence said, “The reality is that for all the sacrifices the American people have made...the truth is: There are real costs, including the health and wellbeing of the American people, to continue to go through the shutdown that we are in today.”

Earlier he said, "We have to make sure the cure isn’t worse than the disease.”

While there were small protests against distancing, shutdowns and staying home—mitigation activities that are centerpieces of a presidential plan that's in place through April 30—in some states during the weekend, a poll from NBC News and the Wall Street Journal indicate most Americans are not ready to re-open the economy.

Nearly 60 percent of those polled said they'd prefer to keep stay-at-home restrictions in place despite their disruption to the economy. 32 percent are concerned that the US will move too slowly to rescind lock downs.

The poll, though, breaks down along partisan lines. Nearly 80 percent of Democrats are more fearful of the virus than a struggling economy. Republicans are split, with about 48 percent favoring a return to work and 39 percent concerned about releasing lock-down conditions too quickly.

The poll was conducted April 13-15, just days before the president's return-to-work guidelines were released.

In Governors, CDC and Fauci We Trust

Regarding trust, 36 percent generally trust what the president has said about the virus; 52 percent do not.

The mixed messages from Washington are reflected in the poll. 50 percent of voters are satisfied with DC's virus response, 48 percent are dissatisfied.