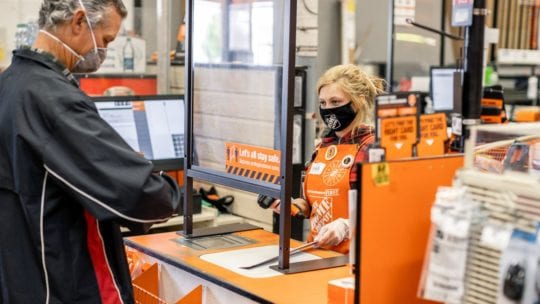 (Cue the intro music for the Edelman Trust Barometer, whose main takeaway is that consumers trust brands more than governments, media and nonprofits. Moreover, consumers want CEOs to take stands and solve society's problems. A larger question, of course, is whether or not the public is comfortable having corporate America enlarge its influence and make healthcare policy.)

Clearly, some in corporate America are listening. State and local requirements be damned. Brands are making a statement that they want to protect employees and customers.

The retailers also are making a statement about mask wearing. Looking skeptically at their move, you could argue they think their businesses will fare better if customers and employees are in masks. In addition, it seems they are tacitly acknowledging that politics and the economy need to coexist with medical science.

The political football that is this country's response to the pandemic has created several factions and made mask wearing a political issue. For example, Georgia governor Brian Kemp is attempting to block a local Atlanta rule mandating masks. This morning, Kemp seemed to walk back his attempt, however.

More confusion comes from the president. Federal guidelines encourage mask wearing, but the communicator-in-chief has made just one public appearance masked. It's hard to know where he stands.

In general, the medical and science communities believe mandating masks for one to two months can be a major step toward slowing the spread. While many in medical science prefer another shutdown, they admit the political leadership needed to effect this move is absent. Masks seem the next best thing.

It appears inescapable that the nation, for the moment at least, is in a losing battle with the novel coronavirus. The country set a record yesterday for newly reported virus cases, at 70,000. While a number of states have controlled the spread, nearly 40 are reporting a rise in cases. In addition, several hospitals in the south and southwest are overwhelmed.

It's clear what Home Depot and others requiring masks believe is the best option.

Not a Large Jump

Home Depot said today that as July 22, all customers must mask up in its US stores. It wasn't a giant leap. Home Depot employees already wear masks per requirement. In addition, at some 85 percent of Home Depot locations, state and local regulations make it mandatory that customers wear masks.

Small children or those with a valid medical condition will be exempt, Home Depot said in a statement. Should a medical condition prevent a customer from wearing a mask, he/she should discuss the situation–presumably from a safe distance–with a Home Depot employee before entering the store, the company added.

It's never that easy, though. NPR reported an issue with Home Depot failing to enforce mask wearing in parts of the country where they're mandated. It's unclear if Home Depot has changed the policy on having employees refuse admission to its stores if a customer isn't wearing a mask.

Agreed. They should start with following local and state law. Home Depot has knowingly been breaking WA State law since July 8th which requires businesses to refuse service to customers without face coverings. https://t.co/cEqo87A8qJ

On the upside, Home Depot communicated its stance well. In its statement, Ann-Marie Campbell, EVP of stores, thanked employees for "working so hard" during the pandemic. She also thanked customers "for their cooperation as we work to protect everyone in our stores.”

The statement said the retailer will post signs at store entrances reminding customers of the mask rule. In addition, "Social distancing captains and store associates will be available to provide masks to those shoppers who may not have one."

Floor markings, signage, plexiglass shields and PA announcements will help customers and employees practice social and physical distancing, Home Depot said. The company also has a section of its site dedicated to coronavirus safety measures in its stores.