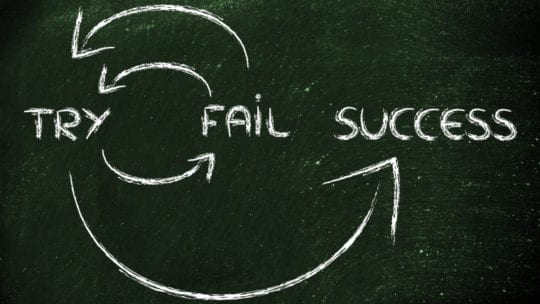 [Editor's note: “Failure is the mother of success.” Business professionals know this to be true. But it’s a concept that has a strong historical foundation. Thomas Edison tried thousands of different ways to invent the light bulb before he

discovered his life-altering solution. Babe Ruth hit 714 home runs during his career, but at retirement, he also held the mark for most strikeouts. The great restauranteur Colonel Sanders had his now-famous recipe for fried chicken rejected more than one thousand times before it was accepted. Failure is the mother of success. Struggle is the best educator. And innovating and failing fast have become top business strategies.

In this PRNEWS series, in partnership with the Institute for Public Relations, some of the most successful leaders in the industry will share lessons they learned from failure.]

Failure is the mother of success. This saying has never been truer for me than when I think about how I developed as a writer. Good writing was never something I gave much thought about as a student. At least that was the case until I found myself taking a class in “Senior Composition” in my last year of high school, only because I needed another English credit.

The teacher, Mrs. Gottlieb, was married to a Pulitzer Prize-winning journalist and editorial page writer at the St. Louis Post-Dispatch newspaper. She was very focused on techniques used in literature-writing. I was intimidated, never having done that type of writing.

At that moment, I knew I was in for it. I had never thought of myself as a great writer, much less a creative writer, and didn’t feel I had much talent. Guess what? I was proven right!  Here’s how it happened.

Mrs. Gottlieb taught us what she called “indirect writing.” The idea was that the theme of the piece becomes apparent through how the story is told, although never blatantly stated. We each had to read our work aloud to the class, and classmates would guess the theme as well as critique the writing.

I thought what I wrote wasn’t bad, but I got raked over the coals. I received a C-, but the put-down I got from the class was worse than the grade. This became a personal matter: I had to prove the class wrong. The teacher motivated me to do better. She made me believe that great writing was a major achievement, although a major mountain to climb.

As the semester progressed, I did do better. I ended up with a ‘B’ grade. The inspiration to be a fine writer never left me, but I left it -- focusing more during my university years on writing papers and tests.

But then something happened. I ran for student president at Washington University… and lost. A pivotal moment for me. Crushed though I was, the editor-in-chief of the student newspaper invited me to write a weekly column. I had never written journalistically before. What was the column’s focus?  The editor advised: “Your own point of view about what is going on around here. You know the faculty. You know the leadership… the policies being debated. Say what you think!”

With trepidation, I took the assignment. Students commented on the column, but the editor never said a word. I was never confident in the elegance of my prose.

My confidence was boosted when I won first prize for column-writing in a national competition among university student newspapers, sponsored by the University of Missouri School of Journalism. When I got the news, I finally had the courage to call the editor to ask him what he thought about my writing – he said he thought it was good. I wondered what my high school teacher would have thought…

I got my next test as a reporter for the Washington University Law School newspaper in my first-year post-graduation. Working hard, I became editor-in-chief in my senior year. But I elected not to practice law and instead pursued a career in public relations. I put together a portfolio of journalistic achievements to show prospective employers in New York. I was slammed when a potential employer examined my portfolio and said, “Not bad, but this would never make it in the professional world of New York -- this is COLLEGE WRITING.” I still haven’t forgotten.

I felt kicked in the face. How was my writing ever going to make it? Nevertheless, I was hired for my first job in public relations. Writing was a challenge that first year. Lots of redrafts and do-overs. But my writing made it through subsequent jobs, and I was recognized for sales, leadership, and organizational talents.

Nevertheless, as a senior VP and leader of one of the firm’s largest groups, I was always assigned a writer to my group -- the boss saw my writing as a weakness compared to my strengths. This nagged at my inner self; I still wanted to prove that I had mastered the art of writing.

I then wrote numerous articles published in industry magazines, receiving positive comments from my associates. When I founded my own firm, I realized that my selling ability could easily be converted into sales-proposal writing, listening to the words in my head as I wrote. I became a key blog writer on communications topics for Forbes magazine for over five years. Many awards rolled in as our agency grew and grew.

Lessons learned: Never give up. Quitters never win. Have patience. Recognize talents in others that complement your own. Be conscious of your shortfalls and accept the fact that they one day may become your strengths.