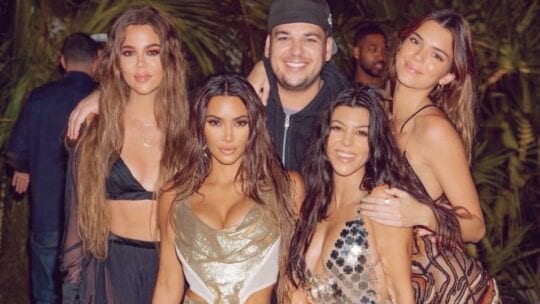 That sentiment might have landed in the era of celebrity spotting on beaches and in Whole Foods, but in a pandemic year, audiences do not want to hear it.

Kim Kardashian West, arguably the internet’s first celebrity influencer (on Instagram, at least) is in the crosshairs of the social media masses this week after posting photos from a lavish island gathering with dozens of friends and family with the following—now widely memed–announcement:

"After 2 weeks of multiple health screens and asking everyone to quarantine, I surprised my closest inner circle with a trip to a private island where we could pretend things were normal just for a brief moment in time."

As coronavirus cases in the U.S. shatter records daily and hospitalization rates continue to climb, it is highly unlikely that people scrolling through their social media feeds want to hear that the Kardashian clan “danced, rode bikes, swam near whales, kayaked, watched a movie on the beach and so much more.”

Kardashian West attempted a humble brag, noting her privilege. “I realize that for most people, this is something that is so far out of reach right now, so in moments like these, I am humbly reminded of how privileged my life is."

When a celebrity has hundreds of millions of devoted followers ready to come to the rescue, excoriating the celeb for insensitivity is unlikely to have an impact. Instead, the meme-ing masterminds of Twitter determined humor and humiliation to be the best route, copying and pasting Kardashian West’s words above a number of pop culture scenes (often horror-film or art-inspired). Brand communicators quickly caught on, with the Metropolitan Museum of Art’s post going viral:

After 2 weeks of multiple health screens and asking everyone to quarantine, I surprised my closest inner circle with a trip to a private island where we could pretend things were normal just for a brief moment in time. pic.twitter.com/FRLaCSe11J

Outside of an apparent inability to read the room (much like the celebrity-studded “Imagine” supercut we wrote about back in March), Kardashian West’s post has a dicey health-communication implication. We know Americans are fatigued by months of quarantine and taking increasing risks. The winter holidays are on the horizon, and along with them, the promise of extraneous travel and super spreader indoor gatherings.

In addition, COVID has not spared the Kardashians: Khloe Kardashian, Kardashian West’s sister, revealed today (Oct. 28) that she contracted COVID months ago. The admission was featured as part of a promo video for the upcoming season of the siblings’ reality television show, “Keeping Up With the Kardashians.” The timing of the video is unfortunate—the show’s PR team would have done well to wait until memes gave way to election coverage before releasing the teaser.

For months, healthcare communicators have faced an uphill battle in educating the masses on COVID-19 prevention and safety. This season, they face a tough road as they continue to urge caution and patience amid a number of spikes (or waves, depending on which states, publications and state agencies you follow). And, posts like Kardashian West's suggest that as long as everyone has been tested and claims to have quarantined, risks are minimal. We have yet to learn from healthcare officials whether that’s the case.

New Jersey has seen coronavirus decimate its populace, particularly in the early spring months when hospitalizations and deaths were highest in the Tri-State area. Still, the state's Twitter account has long had a flair for humorous pop culture takes, even in troubling times. So, its meme was par for the course in terms of brand voice, featuring The Sopranos cast on vacation.

After 2 weeks of multiple health screens and asking everyone to quarantine, I surprised my closest inner circle with a trip to a private island where we could pretend things were normal just for a brief moment in time. pic.twitter.com/27WFsdkaVx

So, how might a PR representative of an influencer or celebrity seemingly making light of the virus respond after so much ridicule? For one, an apology (and not a non-apology-apology) is warranted, acknowledging insensitivity to those who have lost loved ones to, or who are suffering with the virus. Update: As of this writing, Kardashian has not acknowledged the clapback, simply posting another vacation photo to her Twitter feed with the caption "Girls just wanna have sun."

Alternately, a PSA in which Kardashian West warns her audience about the risks of partying in large groups would at least show the celeb is interested in correcting the healthcare narrative. Perhaps she could team up with New Jersey for some lighthearted—but effective—self-parody.