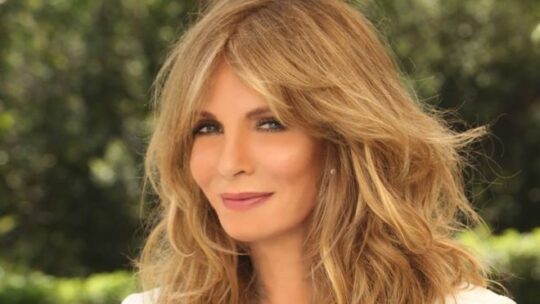 [Editor's Note: We depart from our tips, tactics and strategies approach for this holiday essay. In it, John Casey expresses gratitude for a relationship between PR pro and client. It's our way of wishing you, our reader, a wonderful Thanksgiving.]

Each year at Thanksgiving, I pick one professional experience to be grateful for. This year, with news that Kmart is closing its remaining stores, I am grateful for years spent with an 'angel' of fashion.

As we know, SMT's are a trudge. But Jaclyn never complained. She'd sit in a lit studio, with a camera pointed at her for hours on end. Usually she was beamed into local morning news-and-lifestyle programs across the country. It’s grueling work. Between appearances you get a five-minute break.

While we were waiting to go live during a local news program, the anchor, who was between commercial breaks, had a live mike. Suddenly, in the quiet studio where Jaclyn and I sat, we heard the anchor barking orders to her crew. At one point she yelled, “Who is this person we’re interviewing next? Who is Jaclyn Smith?”

To Jaclyn, I was fun-loving and easygoing. At that moment, though, I wasn't.

Shaking in anger, I ran to the control room, and asked to speak with the anchor. I don’t want to repeat here what I said, but by the end of the conversation she knew Jaclyn Smith.

Officially, I became one of those hotheaded PR guys.

Besides the many jobs lost, one of the saddest parts of Kmart’s closing is the loss of Jaclyn Smith’s line of apparel and home goods.

Starting in 1985, Jaclyn became the first celebrity to put her name on an apparel line at a big-box retailer. She remained loyal to the bitter end. But that’s Jaclyn, one of the most loyal people on the planet, and, true to her iconic television character, an angel.

It was a big gamble for her to sign a deal with Kmart. She was glamorous, gorgeous and gifted. A lot of people told her ‘Don't do it.’

However, Jaclyn explained to me that she had a gut feeling that it was the right move. She was correct.  She sold $100 million+ worth of products during her 36 years at Kmart, according to estimates.

I was at Kmart during Martha Stewart’s last year. A branding agency was hired to find Stewart’s replacement. The terrific CMO, Bill Stewart (no relation to Martha), invited me to a meeting where replacement suggestions were revealed. Several names were mentioned, but, to me, one was missing.

“Did anyone consider Jaclyn Smith?” I asked. “She’s loyal to a fault, and so are her customers. We’ve been doing some great PR around her, putting her back out as a Kmart fashion icon.”

Let’s be clear. I was not responsible for the expansion of Jaclyn’s line at Kmart, after Stewart left. But I was happy when she branched out into home décor in 2008 and outdoor furniture. Jaclyn deserved the increased shelf-space.

Working with celebrities comes with the territory in PR, particularly with retailers. But there was no one more courteous, kind and giving than Jaclyn. The biggest surprise was seeing her zest for life, and reveling in her sense of humor.

And she was down to Earth. So many reporters told me so. And, they'd say, ‘You're lucky to work with her.’ And they marveled that she loved her line of apparel.

She could afford designer clothes and accessories, but Jaclyn relished and was proud to wear the styles she helped design at Kmart. She really cared about her line, and loved to talk about it. That meant a great deal to customers. During tours of Kmart locations, she enjoyed when customers praised her stylish and affordable line.

Years later, Jaclyn remains a friend. This, despite the fact that she had me tag along with her to a dinner with Bravo executives. They pitched her the reality show “Shear Genius.” She wanted a PR perspective about how the show might resonate, and how it could help her brand.

A Reality TV Host, But Not Really

I was, along with others, in favor of her doing it. But Jaclyn is not a reality star. A reality star requires somewhat of a fabricated persona. Jaclyn is as authentic as they come.

I was sad when the notification popped up on my phone that Kmart was closing its last stores. As a former Toys “R” Us employee, I’ve been through this passion play. But with the Kmart news came the realization that fashion was losing one of its most enduring stars.

It was the thrill of a lifetime to work with Jaclyn and become her friend. I'm grateful for all of it.

When I mention her name and someone asks, ‘Who is she?’ I assure you that I explain who and all that she is. After all, isn't that what a devoted and extremely grateful PR guy would do?

John Casey is lead columnist and editor-at-large for The Advocate. Previously, he was a media relations director for Sears Holdings.