During the opening days of 2016, a hot new startup company, Lumosity, was hit with a $2 million fine for false advertising—essentially running a very aggressive and ubiquitous advertising campaign based on claims it could not prove. Sounds like a lot of 10-year-olds I know.

While that news was breaking, an old company, the Boston Globe, was dealing with a very old-school problem—home delivery of its product. It did so in a brilliant way that had everything to do with PR and nothing to do with marketing.

San Francisco-based startup Lumosity is the most visible of the “brain-training software” companies capitalizing on fears of America’s aging demographic by offering computer games that purport to sharpen one’s memory. In the decade since its founding, Lumosity has become ubiquitous, spending millions on advertising and marketing to get out its messages. The only problem was that its messages weren’t true. Its advertising promised that using its games would reduce or delay memory loss, intellectual impairment, prevent Alzheimer’s and dementia, help students learn better and improve athletic performance.

Too bad Lumosity didn’t have research to back up those claims. Nor did it bother to inform anyone that the research it had was a bit unorthodox. Users were offered prizes, including a trip to San Francisco, in return for testimonials. Lumosity’s response to the fine was that the offending verbiage was “marketing language” and was no longer being used in its commercials. It also continued to cite other research that’s been disputed. The direr message to potential investors came from the FTC, which lowered the fine from $40 million to $2 million after it examined Lumosity’s books. Presumably the FTC deduced it couldn’t get blood from a stone. 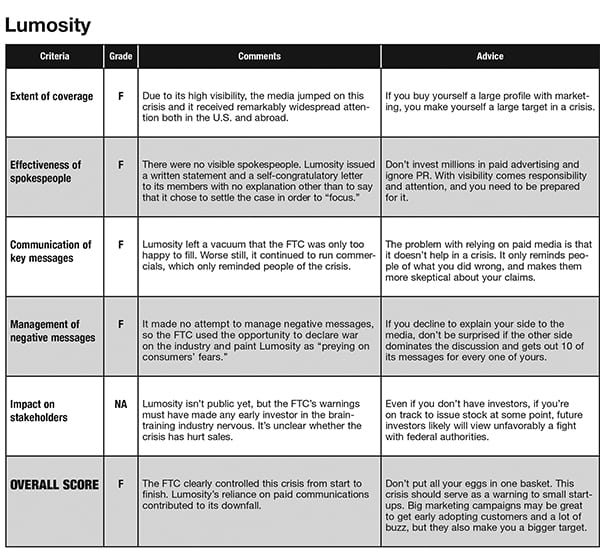 At the same time Lumosity was taking its punishment, subscribers punished the Boston Globe for failing to deliver the paper. Apparently, as a cost-saving move, Globe management made a change in its home-delivery vendors. Had this been any other town, vendors would have been evaluated, a winner would have been chosen and only the accountants would have known the difference.

People who settled in Boston rode horses and kept cows, so its streets are notoriously narrow and impossible to navigate. The company the Globe switched to, ACI Media Group, may be an expert in distribution across the country, but couldn’t find its way across the Boston Common because delivery routes “lacked any logical sequence,” according to a source. Worse, ACI couldn’t hire enough drivers to deliver the papers and then was unable to prevent hundreds from quitting when they found themselves using faulty delivery routing that sent them back and forth across the city numerous times. As a result, thousands of papers were left sitting undelivered on loading docks.

Then, in an unprecedented move, Globe editors and writers hit the streets and delivered the paper. The move astonished customers and the media. Many subscribers took to social media to celebrate the effort. What might have been a disaster was mitigated, if not solved entirely. Management got enough breathing room to bring ACI to the table and rehire the former vendor to help clean up the mess. 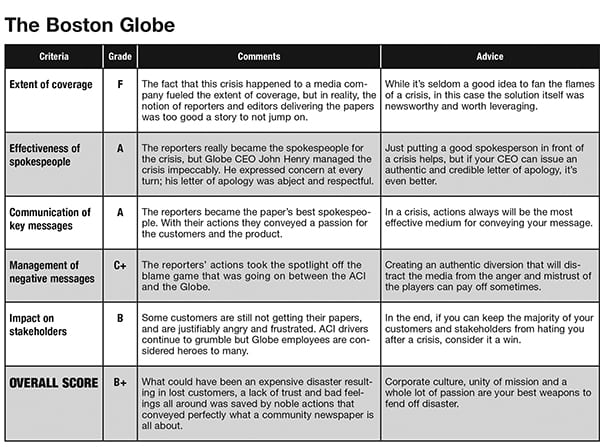