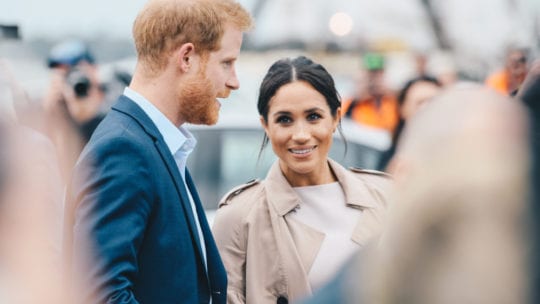 While a royal family does not reside in America, the British monarchy proves quite popular among many in the U.S. Over 3 million people watch The Crown on Netflix. US Weekly created a section titled "Royals" on its website. And according to Nielsen, more than 29.2 million viewers watched the royal wedding of Meghan Markle and Prince Harry.

Make no mistake, this also applies to the current battle between the now former Duke and Duchess of Sussex and the Queen of England. Breaking news alerts popped up on mobile phones everywhere this past weekend when Queen Elizabeth II, released a statement saying Harry and Meghan would no longer hold titles within the royal family.

The media discussion surrounding the break seems shrouded with mystery and hearsay — with statements being given on both sides, but no one really coming forth and explaining the real reason for the divide. This creates an open dialogue for the public, leaving the families susceptible to rumors and falsities.

Many takeaways can be found regarding the public relations tactics taken by the famous Brits in yet another family crisis.

Both parties spent a lot of time and effort trying to come to a compromise on this unprecedented royal path. There’s not really anything else to compare it to. Therefore, the more questions asked when strategizing statements and messages — the better.

Mike Paul, president at The Reputation Doctor LLC, worked with the royal family in the past doing media training.

“They are in uncharted waters,” Paul said. “There is no data or research (to help create a strategy). This royal family has never had a breakoff.”

Paul said that Markle probably began searching for PR firms before the birth of her baby, as the newlyweds had been dealing with issues within Buckingham Palace and the British media since she and Harry went public. He said their first priority in this time of crisis is to discuss the safety and security of their immediate family and communicate that message to the public.

“(The media needs to) look at the crisis nature of what the family is in first, before looking at niceties like job prospects,” he said. “If they aren’t accepted by the royal family, and aren’t protected by the government, how can they confirm safety? Look at (Princess) Diana and the paparazzi.”

Marc Ippolito, president, Burns Entertainment, agreed on the strategy of asking questions to get to the heart of what is most important for each family to convey.

“Some of this may evolve over time, because it’s such a new situation that we have not seen,” Ippolito said. “There is not a lot of history to draw upon. And there will continue to be things that need to be figured out. One issue is what are their names or titles are going to be? That’s not something easy to predict.”

Messaging for the future

Both families shared statements illustrating no ill-will or disrespect towards the other. However, the rules are shifting, and the queen showed full transparency regarding the new roles for her grandson and his bride.

Honesty and transparency will continue to hold importance as Harry and Meghan move to their new home, decide on where they want to spend their time, decide on how they want to make a living, and eventually what caused the chasm in the first place. Even though the statements proclaimed a truce, they failed to discuss a larger issue as to why Harry chose to remove his family from the traditional upbringings of royal life.

In his first public appearance after the split, according to reporting from CNN, Harry spoke candidly to guests at a dinner in London for his charity Sentebale, showing a strong front of putting his immediate family first, no matter what.

“I hope that helps you understand what it had to come to, that I would step my family back from all I have ever known, to take a step forward into what I hope can be a more peaceful life,” he said at the dinner.

All eyes will be on this family to see what their next move will be, especially without financial assistance from the British government. Ippolito said Harry should take his time before deciding on any sort of promotion or career.

“Most people are interested in what happens next,” he said. “Can she go back into acting? That would not be surprising. Acting was what she did, and has every right to do. I’m interested more in what he is going to do. What he is going to be doing professionally next will be an interesting story and how that is handled.”

Ippolito said Harry should be very selective, knowing that his public perception will mean everything for their future.

“He should go very slowly — even focus more on non-commercial activities,” he said. “Charitable causes would be good. No car ads within the next three months. That would take away a lot of luster.”

Paul sees great opportunities for the couple because of their diversion from the norm, and encourages them to embrace the family diversity, something they may have been shunned for in England.

“Brands will want them just for their differences,” Paul said. “Diversity is important and huge and helps them sell internationally.”