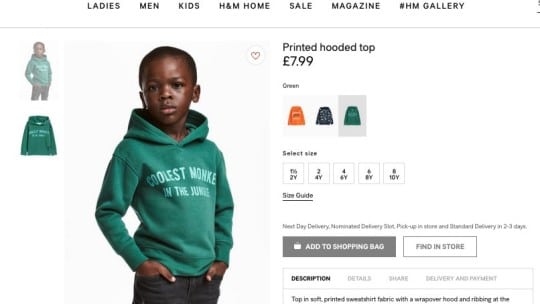 As a communications pro, you want to stay ahead of any crisis or even potential crisis. But sometimes things slip through, and you're left wondering, “How did it get to this point?”

H&M is experiencing a serious reputation crisis after the image of a small black boy modeling a sweatshirt emblazoned with "Coolest Monkey In the Jungle" hit social media.

Blogger Stephanie Yeboah tweeted the image on Jan. 7, and in less than 24 hours it now has over 18,000 retweets and 23,000 likes. Responses to the tweet debated whether or not it is even a racial issue, but the majority of responses were negative against the brand.

Whose idea was it at @hm to have this little sweet black boy wear a jumper that says ‘coolest monkey in the jungle’?

H&M issued an official statement the morning of Jan. 8 that was picked up by many media outlets, including CNN Money and USA Today. The company replaced the image with one of the sweatshirt alone, and initially kept the product for sale on its website.

"We sincerely apologize for offending people with this image of a printed hooded top," H&M said in the statement. "The image has been removed from all online channels and the product will not be for sale in the United States. We believe in diversity and inclusion in all that we do and will be reviewing all our internal policies accordingly to avoid any future issues."

Monday afternoon H&M’s media relations team gave a more detailed statement to PR News, saying that the incident resulted from internal procedures that had not been followed properly and that the item would no longer be for sale.

"We understand that many people are upset about the image," representatives told PR News in an email. "We, who work at H&M, can only agree. We are deeply sorry that the picture was taken, and we also regret the actual print. Therefore, we have not only removed the image from our channels, but also the garment from our product offering globally. It is obvious that our routines have not been followed properly. This is without any doubt. We will thoroughly investigate why this happened to prevent this type of mistake from happening again."

Musician The Weeknd, who had collaborated with and modeled in ad campaigns for H&M in 2017, announced that he is cutting ties with the brand because of the incident. "Woke up this morning shocked and embarrassed by this photo. I’m deeply offended and will not be working with @hm anymore..." he tweeted Monday afternoon.

As we saw with the controversial Dove ad from October 2017, racial insensitivity in marketing has its own viral nature and can have serious repercussions on a brand's reputation.