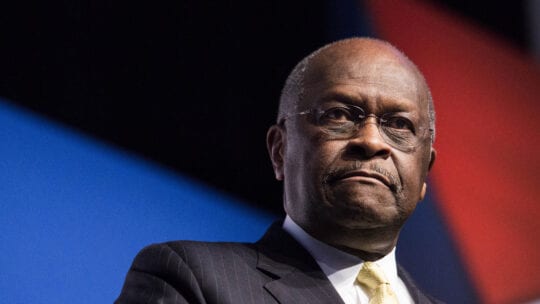 Just in case you thought Biden's candidacy was going to be anything other than completely nuts, team Trump has released a new video. #JoeBiden #KamalaHarris https://t.co/GjAC8VDaVF

Needless to say, most Twitter users who practice an even-keeled infinite scroll, were shocked and confused.

When you see Herman Cain in your timeline. pic.twitter.com/5wkqvpSERG

Herman Cain is apparently tweeting from the dead. https://t.co/gB4amzQYjB

If someone is gonna tweet from beyond can it please be Prince or David Bowie and not Herman Cain?

This bizarre tweet from the Twitter handle of the late Herman Cain, who died of Covid-19, and the incredulous replies are peak 2020. https://t.co/5NJHwEGrKU

For those seeking more information on Cain's tweets seemingly emerging from beyond the grave, account owners updated the bio, as well as included a pinned statement from a group called The Cain Gang. The bio states Cain's daughter, team and family now run the account.

There is news from Cain HQ. The mission continues... https://t.co/LnxmoZDHRu

However, for many fast-and-furious Twitter users, looking at a bio or pinned tweet is an afterthought. The announcement may have worked better with a continuous distribution over several tweets throughout the day.

In addition, what statutes apply when it comes to utilizing an account of the deceased? What are the rights of the deceased when it comes to social media representation? Cain passed two weeks ago. Apparently that was enough of a vacation in the afterlife for his accounts to reignite. Some users may perceive this as crass or questionable.

Ryan Garcia, author of Social Media Law in a Nutshell, said Twitter policies regarding these issues provide only vague guidelines as to whom an account can be bequeathed to.

Garcia noted that the Cain tweets are not the first time this issue has arisen. One of the most infamous examples includes a post appearing from the deceased Joan Rivers endorsing an iPhone. Editing Cain’s bio is a step in the right direction, Garcia said, but it's not ideal.

“Disclosing in the bio is at least an attempt to be transparent, but not a great solution.”

It seems as if Twitter might be wise to step in and clarify responsibilities for all parties on the posthumous account issue. If users are confused, and the language is vague, the rights of everyone involved are at risk.

“We’re so used to accounts being people as opposed to networks of affiliation that it can seem odd,” Garcia said. “Heck, people loved the Blockbuster tweet recently even though they’re mostly dead.”