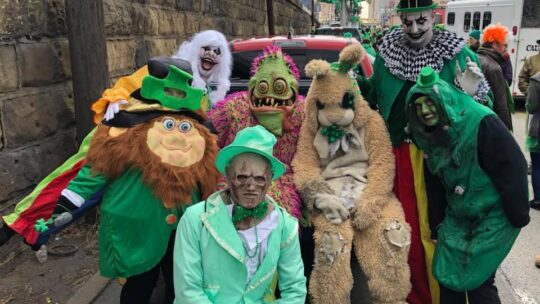 In 2017, I was hired at the ScareHouse, known in Pittsburgh for its theatrical approach to scares, complete with elaborate lights, sounds and sets. Mostly I’ve played apocalypse survivors or zombies, including one slathered in green face paint as a Zombie Pickle.  [Editor's Note: The author/gherkin is at right, above.]

Funny enough, nights lurking in dark spaces filled with fog and thumping music got me thinking about my day job...in PR.

For example, in customer interactions as a PR pro, you represent brand values and messages. It just so happens that at the ScareHouse, brand goals include making people scream.

Below are other similarities between working as a haunt actor and a communicator:

Don’t be afraid to improvise

I began in customer service at ScareHouse. Eventually, I took a chance at haunt acting, which I love.

Yet without being adaptable enough to accept an acting role, I would have missed a transformative experience.

Moreover, adaptability pays off when haunt acting and in PR.

First, you play different characters each night, going from scare to scare. Second, you find no two scares are the same, because no two people are.

Similarly, working with a variety of people in PR means adapting. Each business has different needs and audiences. Saying yes to new opportunities then remaining nimble and adjusting when adversity strikes is as important in PR as it is at a haunted house.

Devil and the details

At ScareHouse, situational awareness and understanding what customers anticipate is critical, so you catch them off guard.

Timing is very important in landing a scare. Usually you play off sights and sounds from other actors, props and sets. So, if you’re too late or early, the scare doesn’t work.

Likewise, since PR is heavily focused on writing and timing, details are paramount. Knowing where to put a comma or when to capitalize a letter keeps readers from getting distracted.

Instead, they can focus on the content, absorbing concepts behind words. This makes the small details as important as big-picture ideas.

Some of the most satisfying scares happen when you approach someone you think won't react, but does.

In this case the customer was open-minded enough to get scared. Instead of leading with a preconceived notion of an interaction, the actor puts forth her best effort without judgment.

When ScareHouse customers don’t show big reactions, even after our best effort, they can still have a good experience. Even though every customer reacts differently, all deserve a good scare.

In the same way, the yeses don’t always line up in PR, but it’s not personal. If you pitch a story, but reporters reject it or don’t respond, it's not a personal rejection.

However, just like the scare, when those factors line up in your favor, the end result is that much sweeter.

Behind the mask, everyone is a real person

Whether at the haunted house or in PR, you have to remind yourself that people are people.

Intelligent pitching takes time and effort. So, you want it to be the best, most important thing a reporter receives.

But relationships are built on trust and a cold call or email doesn’t often convey that. So, it’s important to understand and treat people like human beings.

At the haunted house, customers have a role. They should let themselves get scared. The actors are creating a fun atmosphere and want to have fun too. We’re real people behind the masks, wanting to see you let down your guard and pretend with us. Come along for the ride!

And that leads to the final takeaway...

Don’t take yourself too seriously!

In PR, when an intimidating executive or big campaign makes you anxious, you’ll block yourself from finding the most fun, creative and ultimately impactful ideas.

The haunted house is entertainment, an experience of live, immersive theater. To quote Jerry Greenfield, “If it’s not fun, why do it?”

Sure, the nights can be long. But it’s all worth it when timing a scare exactly right causes someone to fall over, grasp a friend or shriek in terror.

My fellow haunters and I love Halloween and enjoy celebrating it with organized chaos. Every fall we create an experience you can't get through streaming or on your phone. We're in front of you, awaiting your reaction.

Whether it’s a season of haunt acting or another day in PR, you adapt to situations, build relationships and know that everyone deserves your best—whether that's media pitching or scaring the living daylights out of a stranger.

Stacey Federoff is a senior account executive at Red Havas