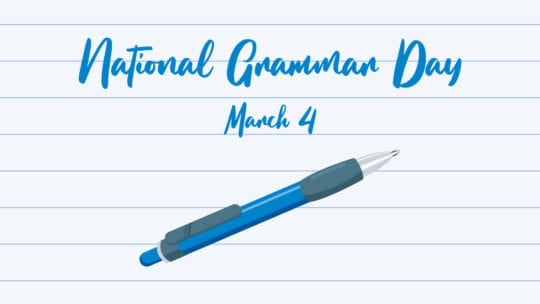 For those of you with voracious appetites for finding typos on CNN's news ticker, or comma splices in The New York Times, we wish you a happy National Grammar Day!

Many of our articles extol the importance of a PR pro writing crisply, clearly and error free. Companies gain their reputation, in part, through press releases, thought leadership content, but also in social media posts and email. Errors in grammar can send a campaign into a spiral when not caught quickly.

Over the years, we've published several articles on becoming a better writer and how to avoid mistakes.We gathered some of the most popular grammatical tips from them for you to enjoy on National Grammar Day.

Comma Usage in a Series

Also called the “Oxford comma,” this term refers to a comma that separates the penultimate item in a list from the final item. A conjunction (and or or) introduces the final item in Chicago style. For AP style, no comma is used.

When using the active voice, the subject of the sentence performs the verb's action.  Some telltale signs of passive voice are these words or phrases: by the, was, is, has been, will be. Writing in the active voice will ensure your work is clear and avoids run-on sentences.

Passive: The house was destroyed by termites.

You’ll find these in a sentence where the descriptive phrase doesn’t match up with the noun immediately following it, which causes confusion.

Dangling modifier: After rising for months, the governor decided to change her policy on unemployment.

This sentence structure causes unnecessary ambiguity. What rose for months? The governor or unemployment? The writer is trying to express that unemployment is rising.  Try flipping the sentence:

Corrected: The governor decided to change her policy on the rise in unemployment.

Eating too much ice cream produced a headache effect. (noun)