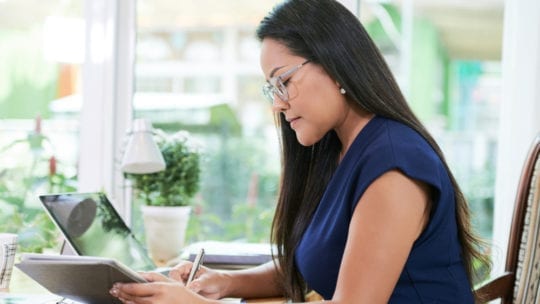 “Believe you can and you’re halfway there.” Theodore Roosevelt on confidence.

Myth 1: If you don’t understand something you’re reading, it’s your fault.

Confidence is critical. “You have to believe you’re an intelligent person. If you’re having trouble understanding something, it’s not you, it’s bad writing,” he says.

Unfortunately, many of us want to sound smart when they write, so they adopt the habits of bad academic writing and use 5 words when just three will do. They also use online glossaries to insert fancy-sounding words. "Forget everything your high school English teacher taught you," Rick says.

People think their writing sounds smarter the more SAT words they use, but most readers won’t be able to understand you. It’s much better, Rick says, to be concise and write copy that's “clear on the first reading…if the reader has to stop and re-read something, you’ve lost them,” Rick says.

Myth 2: Writing simply means I have to dumb it down.

Definitely untrue, Rick says. Writing should be simple, not simplistic and definitely not boring, he says. “Simple writing isn’t simple,” he adds. Or, as Albert Einstein said, “If you can’t explain it simply, you don’t understand it well enough.” A tip: Restrict yourself to a character count, as Twitter does, he said. Rick lauded FDR’s “December 7th, 1941, a day that will live in infamy” speech. “It’s direct and easy to understand. Can you imagine how we’d overwrite that today?”

Myth 3: My subject is too long, dry or complex to be made engrossing.

“Your job as a PR professional is to un-bore things and make them engrossing,” Rick says. One way to get readers interested in something they might not necessarily be drawn to is to create a compelling headline, he says. His example was excellent: a headline from The Washington Post that was the top headline on Facebook in 2013. It was “9 Questions About Syria You Were Too Embarrassed to Ask.” People love numbers, Rick says, “They’ll surely want to know what at least three of those questions are.”

Myth 4: My readers are too august to be addressed in the common tongue.

“Where do you think you are, in England?” Rick jokes as a slide with a picture of Queen Elizabeth is shown. “People [in America] appreciate a little humor and plain language,” he says.

How many bosses have told you that? Again, this myth derives from a confidence issue. For some reason, we think it doesn’t sound smart when we use contractions in our writing and, as you know, we want to sound smart, Rick says. Use contractions. “The best writing is conversational” and we use a lot of contractions when speaking, he says.

Myth 6: My readers care only about the facts.

“Your job is to educate and entertain.” You can’t do that with only the facts, Rick says. “Facts tell, stories sell.” Rick admits this is a cliché, “but it's repeated often because it's true.”

Myth 7: How my writing sounds is unimportant.

“How your writing sounds is as important as what it says,” Rick says. “Crescendos are important…every joke in the world ends with a punch line.” Writing should flow and sound good.

Myth 8: A headline must never be cute.

Rick believes this might be the most destructive of the myths. “A headline,” he says, “is the closest thing writers have to a silver bullet” because it can lure readers to your work.  Several years ago Rick wrote a magazine article called “How to Sell Social Media.” When it was published, the magazine used a headline that began “15 Great Ways to Boost…” It’s the most-read content Rick has written.