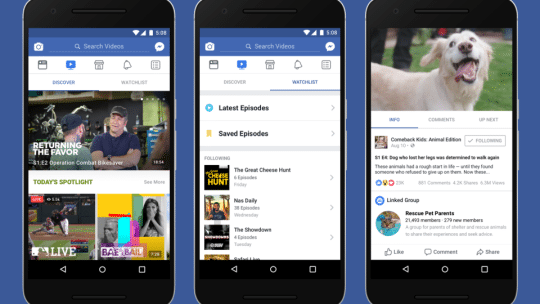 Facebook's latest algorithmic change, which will prioritize posts from friends and family above other forms of content in News Feeds, has caused a stir among brands fearing the worst for their viewer metrics.

While this change is likely the final nail in the coffin for organic reach on Facebook, the real question is, where is Facebook steering brands (and their ad dollars) next?

Top communicators and publications (like the New York Times) have pointed to video—where Facebook has made major investments in recent years—as the next best frontier of online advertising. While Facebook Live remains a popular and highly viewed feature for organic content, Facebook Watch seems to be the frontrunner for Facebook's ad business.

Here's what we know so far about the platform:

Brands can only run ads during mid-roll, but pre-roll is on the horizon. Much like television, a realm Facebook has essentially entered through Watch, brands can run ads mid-program. But the platform is now testing YouTube-like pre-roll ads, a move that TechCrunch, Mashable, the New York Times and others have said is a bid to pull advertising dollars away from YouTube.

Placements are five to 15 seconds long. With only a few seconds to get their message across, the expensive investment (Facebook pitched one agency a $5 million Watch ad deal, according to Digiday) is also a risky one. The good news?  Facebook has said 70% of Watch ads have been viewed to completion, most with the sound on.

Targeting options are limited. Advertisers can loosely target around interests like sports or cooking, but don't have the ability to micro-target as with regular Facebook ad campaigns. However, micro-targeting may be on its way out. A Jan. 22 essay penned by a Facebook executive pointed to the ability to pinpoint small groups as a cause of "toxic discourse" on the platform.

It's tricky to prove ROI with Watch ads. Without a direct link back to an advertiser's website or special offer, it's difficult for communicators to point to Watch ads as the cause of a spike in sales. But Facebook is reportedly creating a testing structure that would monitor and report "brand lift" metrics to advertisers.

With so many limiting factors, it's difficult to see Watch as the biggest advertising opportunity to hit brands since premium cable—an industry Facebook is clearly trying to disrupt.

Stay tuned. (And be sure to catch our Facebook session at The DigiComm Summit Feb. 22-23 in Huntington Beach, California.)