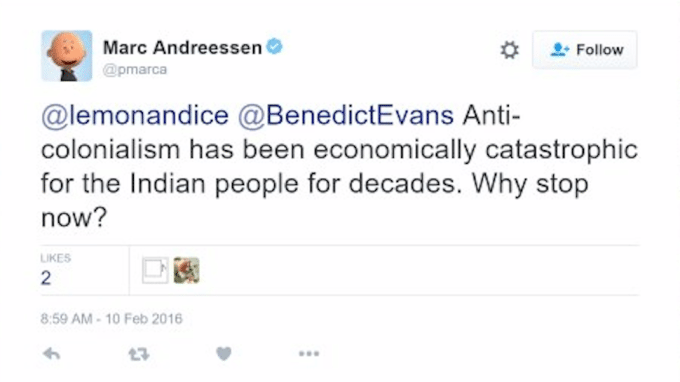 Facebook has been in crisis mode since a controversial tweet from Marc Andreesen, investor and member of the board, set off a firestorm. The issue at hand: the Telecom Regulatory Authority of India banned Facebook's Free Basics, a service which provides limited, affordable internet access to developing countries. Because users can access only a few websites for free (a list determined by Facebook), it was determined that the service violates net neutrality. The tweet at issue (since deleted): 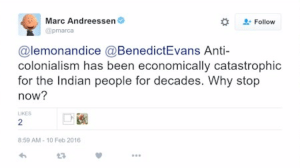 It's important to remember in communications that words are an imperfect delivery system for thoughts. What did Andreesen mean, and what meanings could (and did) people take away from his tweet? For a charitable interpretation, we can look to a sentiment Andreesen expressed in another tweet:

Denying world's poorest free partial Internet connectivity when today they have none, for ideological reasons, strikes me as morally wrong.

Here are other ways one could interpret him:

It's not hard to see how people might react negatively to such inferences. To his credit, Andreesen quickly attempted to set the record straight with tweets expressing his love for India, his opposition to colonialism and his regret at making statements he was too ill-informed to make. Mark Zuckerberg jumped in with a Facebook post to clarify that Andreesen's comments, which he found "deeply upsetting," did not represent Facebook, and seemed to imply respect for India's decision.

How can we learn from this? It seems obvious that if you are an important stakeholder, you should not rashly make potentially controversial statements. The problem with this is that often it's hard to see how controversial your statement might be. Most of us think of ourselves as reasonable people; how could our reasonable opinions offend? So take the following steps: 1) Ask yourself if you are truly well-versed enough on the issue to opine on it; 2) Reflect upon the various subtexts that your words might express; 3) Consider ALL of your audiences—and when you're Facebook, that means the world.

For more crisis guidance, register for our webinar Effective Crisis Communications: How to Manage the Message and Protect Your Brand, taking place on Feb. 18. Presenters from ConocoPhillips, Kglobal and DuPont Company will share their experience and offer concrete steps to developing a crisis management plan.