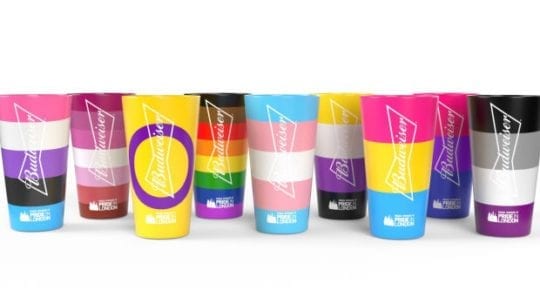 June is Pride Month, and with it comes the annual parade of brands identifying themselves as allies—some creating space for genuine conversations, others opportunistically marketing to the LGBTQ+ under the guise of progressive brand values. Whether a brand's embrace of queer culture is genuine or not, it's clear that the communications industry still has a long way to go.

Case in point: to kick off the month, Budweiser UK announced its partnership with London Pride by launching its "Fly The Flag" campaign featuring nine different brightly-colored Budweiser pint glasses, each depicting a different pride flag. The beer brand shared the following collage, followed by profiles of each glass that explained what the respective colored flags meant:

Excited to reveal we are now proud sponsors of Pride in London! We are working closely with them and our charity partners to celebrate the diversity within the LGBT+ community and Fly the Flag for everyone at the #PrideJubilee

A taste of what's to come... pic.twitter.com/g1FYlXqJJk

Of the magenta, blue and lavender glass, Budweiser explained: "Magenta is for same-gender attraction, blue is for attraction to genders other than your own, and lavender (a mix of the two) represents attraction to your own and other genders, though some interpret it differently." Budweiser explained the blue, pink and yellow glass as "blue [symbolizing] male attraction, pink female attraction, and yellow attraction to other genders." On the yellow glass with a purple "O", they wrote, "[t]he circle symbolises wholeness and completeness, while purple and yellow were chosen as they don’t have male or female associations." The other flags represent non-binary pride, transgender pride, genderfluid pride, lesbian pride, asexual pride and inclusive pride.

Suffice to say, Twitter wasn't having it. Advocates in the queer community resented seeing their flags used to sell beer, calling it opportunistic and insincere. Others lamented that Budweiser went too far by over-explaining what the various flags meant.

There's a difference between making space for a conversation and telling people what the conversation will be about.

The brands that launch successful social campaigns capitalize on engagement—not by telling customers what to talk about, but by creating assets that promote organic dialogue. With their London Pride campaign, Budweiser didn't create a dialogue so much as over-explain nuances and definitions that most agree shouldn't come from a beer brand in the first place. In this case, the organic conversations that did happen likely weren't what Budweiser hoped for:

What if Budweiser had partnered instead with someone like transgender activist Monica Helms (who designed one of the glasses), offering her a forum in which to tell her own story?

Instead, as one Twitter user pointed out, the brand reinvented several pride colors and then told people what they meant. Providing a platform for marginalized groups, then speaking for them on your platform, is not the same thing as giving a voice to the voiceless.

Social media ratios can be misleading, as is the case with Budweiser's posts here. Conventional wisdom tells us that a disproportionate influx of comments over likes means a tweet is performing well, but a closer read can uncover a majority of negative sentiment. For instance: the meme of Steve Buscemi posing as a "woke" ally with a skateboard and rainbow shirt, the glut of Twitter users who believe in "traditional values" now forsaking Budweiser and countless other Tweets that have been removed for offensive content.

The most repeated word in these comments is "pandering," a telling reminder that there is such a thing as taking too much of a stand as a corporate entity. The last thing a brand wants is people questioning the logic behind its messaging decisions, yet that is just what has happened here. Budweiser's purporting to be an authority on LGBTQ+ symbolism generated more questions than it answered. Many were unsure what exactly Budweiser was educating people on—or whether the brand was simply making it up.

It doesn’t. They don’t know what they’re talking about and are just pandering.

Brand communicators who wish to support a marginalized identity group or culture, take note: The base optics of relationships between culture and capitalism will, by nature, look opportunistic and pandering. If the cause genuinely aligns with your brand values, bringing in allies and stifled voices to explain things for themselves is a stronger and more sustainable way to create dialogue than acting like your brand has all the answers.