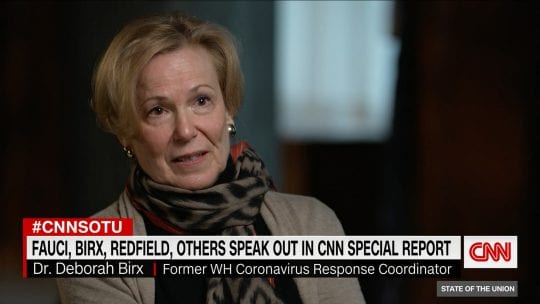 Since late January 2021, Dr. Birx has engaged in a media tour. It started with a scathing reveal of virus disinformation during her White House tenure on CBS’ “Face the Nation.” While some applauded her coming forward, many more shamed Birx for not halting the practice while still at her post.

In PR, interviews are meant to provide clarity; however for Dr. Birx, they've sullied her reputation.

In the CNN dialogue, her most telling interview to date, Birx admits the U.S. death toll from COVID-19 could have been much lower had the proper guidelines been enforced and communicated.

"I look at it this way: The first time, we have an excuse," Birx told CNN chief medical correspondent Dr. Sanjay Gupta. "There were about a hundred thousand deaths that came from that original surge. All of the rest of them, in my mind, could have been mitigated or decreased substantially...The federal government did not provide consistent messaging to the American people and that is fault number one."

While honesty provides clarity, it may not offer solace for those who lost loved ones during the past year. And the response to Birx often is not aimed at the administration, but Birx herself, for, as we noted above, not stepping up and doing the right thing while in power.

During the recent CNN interview, Birx said a tense working environment in the White House made it difficult to speak out. She blamed the administration. Birx said she received a very “uncomfortable” call from Trump after appearing on CNN last August.

“I knew I was being watched. Everybody inside was waiting for me to make a misstep so that they could, I guess, remove me from the task force,” says Dr. Deborah Birx, the White House coronavirus response coordinator under fmr. Pres. Trump, on the pressures she faced. #CNNSOTU pic.twitter.com/5zmR0P3SbN

Regardless of who is to blame, Birx’s reputation seems somewhat salvageable. She’s employed with the George W. Bush Institute as a senior fellow; she's leveraging her “significant expertise in global health, pandemic response, and health systems to support the Bush Institute’s portfolio of work," according to a press release.

Ariane Lovell, VP, health media relations at Finn Partners, said this could be a step in the right direction.

“Looking ahead to the road of recovery from COVID and to future public health issues, Dr. Birx should focus on how she can improve public health in [her] partnership with the George. W. Bush Institute,” Lovell said. ‘The work will speak for itself and her reputation could be restored.”

Aside from focusing on new work and research, Dr. Birx should continue to promote scientific findings in her role to repair her reputation, Lovell said.

“Public health leaders have a vital role to play and should act in accordance with the scientific community to disseminate research, science and innovation to the public proactively,” she said. “If Dr. Birx keeps this in mind, she can recoup from this circumstance.”

If there are positives for Birx, it’s that she no longer has to hide the truth, and now the relationship between the White House and public trust can begin to heal. Transparency remains one of the foundations of good PR.

“At its core, PR is about telling the truth and trust,” Lovell said. “Public health leaders have the responsibility to be transparent and to ensure the public is confident in their ability to convey information about science and health policy to all Americans.”