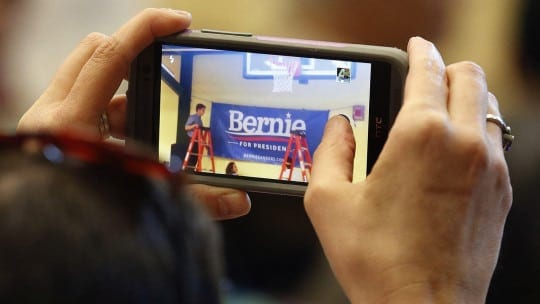 Previously we looked at the Hillary Clinton and Donald Trump presidential campaigns' social media strategies, and the people behind them. We would be remiss to overlook the one candidate whose rise can be in large part attributed to digital communications: Bernie Sanders.

There’s a lot of speculation about how exactly Bernie Sanders, a relatively unknown independent senator from Vermont, could orchestrate such a rise to prominence and present a serious challenge to Hillary Clinton. Some say it’s his anti-establishment attitudes, others his abilities as an orator.

The fact is there's no one reason why Sanders seems to have captured the imagination of a significant portion of Americans—specifically the younger generations. Perhaps the most interesting theory, and also the most measurable, is his savvy and incredibly successful social and digital media campaigning.

It seems a little counterintuitive that the oldest person running for president is the one who arguably uses new media most adeptly. But in many ways, Sanders built his campaign on digital communications.

Sanders’ team had excelled at using the latest social technologies, like Snapchat, to support the candidate. Led by Revolution Messaging, the campaign knows most of its supporters are younger, tech savvy millennials. So instead of doubling down on their efforts on platforms with the widest reach, like Facebook and Twitter, Sanders’ campaign uses innovative tactics to reach its audience in the correct medium. The campaign's use of Snapchat filters in Iowa showed a level of experimentation and tech savvy that’s unusual for political campaigns.

Even though the Sanders campaign is effective on traditional social media, a large portion of its digital success stems from the campaign’s legions of tech-savvy online supporters.

The online focal point for Sanders supporters is the popular community site Reddit. The site displays links to articles and topic posts and also allows users to create areas where users can discuss specific topics, called “subreddits.” It’s within these subreddits that Sanders’ supporters have been able to draw huge crowds for rallies, recruit individuals to phone-bank for the candidate and register voters. There is even a subreddit where Sanders’ supporters who come from computer programming backgrounds create apps and other programs to assist the campaign.

As Obama’s 2008 campaign heralded a new era of political campaigning by introducing social media into the mix, the current presidential candidates are using digital technologies in groundbreaking ways. Despite Sanders’ struggles in the primary race, his success with online communications is hard to match. In many ways, it’s because of social media that many Americans now #FeelTheBern.